With No Races to Run, NASCAR Hall of Famer Goes Retro with 1979 Ford Bronco

KANNAPOLIS, N.C. (March 18, 2020) – Born in 1971, Tony Stewart grew up in a robust era of car culture, where manufacturers catered directly to the consumer with unabashedly loud graphics splashed across premium versions of its cars and trucks.

One of the most prominent and iconic graphics packages came from Ford, and it’s one that caught the eye of NASCAR Hall of Famer Tony Stewart when he was an 8-year-old racing go-karts in and around his hometown of Columbus, Indiana.

Ford’s Free Wheeling package featured a bright, kaleidoscope color palate that oozed 70s-era swagger. The limited-edition run was available on the F-100, F-150, Bronco, Econoline van and Courier, and even the Pinto Cruising Wagon. But the Free Wheeling version that resonated the most with Stewart was the one on a black Ford Bronco.

“Every year when we went down to Ford Championship Weekend at Homestead-Miami Speedway, I would join Edsel Ford and on race morning and we’d judge the Mustang show,” said Stewart, the three-time NASCAR Cup Series champion who co-owns Stewart-Haas Racing with Haas Automation founder Gene Haas. “This past year they had a bunch of Ford Broncos there too, and that got me thinking about those Broncos with those cool graphics packages I remember seeing back when I was still racing go-karts. I started looking around on the internet and when I finally found it, I knew I had to have it.”

It is a 1979 Ford Bronco Ranger XLT. The year prior, the Bronco migrated to the F-series chassis, giving it full-size proportions. The big, tall sides and wide hood provided the ideal canvas for those vivid stripes that signified the Free Wheeling edition. The Bronco, in particular, amplified those bright graphics with blacked-out bumpers and mirrors. And the sharp looks were more than skin deep, as the Bronco came with a rumbling, 400 cubic-inch V8 that made its presence known even while sitting idle as it rode on quad, heavy-duty shocks and big, 15-by-8-inch wheels. It was this look that Ford featured prominently in its ads, and has since become a cult classic. 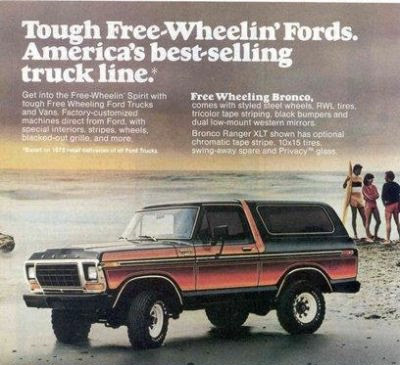 “It looks badass,” Stewart said, “but it’s also pretty simple, especially under the hood. I can work on it, and that’s the fun part. There’s an Advance Auto Parts not far down the road from where I went to high school. I can pick up a case of Mobil 1 synthetic, a filter, and do the oil change myself. I can work on it and tinker with it and, you know, I’ve got plenty of time now.”

Stewart, like the rest of the sporting world, is sidelined due to the coronavirus outbreak. Even after retiring as a fulltime NASCAR driver at the end of the 2016 season, the Hoosier has filled his schedule with nearly 100 sprint car races a year. He’s won 23 of those races across a variety of series since his last NASCAR race at Homestead on Nov. 20, 2016. But not being tied to a schedule for the first time in seemingly forever has provided a glimpse of what resides outside a racetrack.

“The rear roof of the Bronco comes off and, honestly, once the weather gets nice, it’ll probably stay off,” Stewart said. “It’s got captain’s chairs up front, but a big bench seat in the back, and with the roof off, that’ll be awesome. I’ve always thought being able to remove the roof was the coolest thing about these Broncos, and now I’ll get to actually enjoy it.”

As much as Stewart relishes his retro Bronco, he’s acutely aware that a new-generation Bronco is getting ready to debut.

“I’m really looking forward to what the new Bronco will look like,” Stewart said. “We kind of got an idea of what it’ll look like when it ran in the Baja 1000 late last year, but that was more of a prototype than anything. I want to see the real deal.”

Would Stewart like to see that real deal with some retro Free Wheeling stripes?

“I’m sure my ’79 Bronco would make a really good big brother,” Stewart said. “Seeing the new one decked out in black with those retro stripes, it would fit right in.”