In this edition of Lou Modestino’s “Track Talk”…..

Read all about these items after the jump…

“We did everything we could to host the event as planned from full capacity, to limited capacity, to no fans in attendance and the events streamed via pay-per view,” state promoted Len Sammons.

Despite the best efforts of the Indoor Auto Racing Championship Series fueled by VP Racing Fuels and the PPL Center, the latest guidelines put an end to any hope of hosting the event on the scheduled date.

“The present guidelines are scheduled to be in place until January 4, which would be our first day of setting up the race track,” added Sammons.   “Indoor gatherings in Pennsylvania are now limited to just 25 people, making it impossible to host the events.”

Updates on the remaining Indoor Auto Racing Championship Series schedule and possible Allentown rescheduled event will be announced at a later date.

Keep up to date of all event information at http://www.indoorautoracing.com or by calling the series office at 609-888-3618.

Martinsville Speedway – which was announced to return to the Tour back in November, along with Richmond Raceway – will open the schedule on April 8.

It will be the first time that the Tour has competed there since 2010.

Martinsville is one of three Tour events in 2021 scheduled to take place during NASCAR national series weekends. The others are New Hampshire Motor Speedway on July 17 and Richmond on Sept. 10.

Other schedule highlights include the Tour’s debut at New York International Raceway in Lancaster, New York (July 31) and a return to Beech Ridge Motor Speedway in Scarborough, Maine (Aug. 21), which hasn’t hosted the Tour since 2005.

Two cornerstones of the Tour, Stafford (Conn.) Motor Speedway and Riverhead (N.Y.) Raceway, will each host three events in 2021.

Stafford will host the season finale on Sept. 25. Riverhead is back on the Tour after being unable to host races this past season due to the novel coronavirus (COVID-19) pandemic.

A notable absence from the 2021 schedule is Thompson (Conn.) Speedway, which has been part of the Tour since its inception in 1985. Next season, Thompson will host a new, six-race ‘Open’ modified series in partnership with the American Canadian Tour and Pro All Stars Series.

Florida Wheelwoman to Compete in Northeast Classic at NHMS 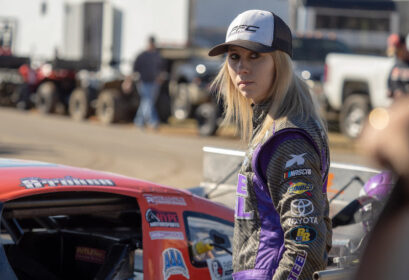 Note: Bobby Webber is the owner/promoter of the Star Speedway in Epping,NH and also fields an ACT Tour Late Model

It’s not often a driver from the Deep South ventures to the Northeast to race. But that’s exactly what’s going to happen in 2021, as Brooke Storer has been tapped by Bobby Webber Racing to pilot the No. 19s ACT Late Model in the Northeast Classic at New Hampshire Motor Speedway on the weekend of April Sat/Sun. April 17-18, 2021.

The team announced last week that Storer, a longtime Wheel Man Series Sportsman standout racer from Central Florida, will pack her bags and head North for at least one race of their campaign.

“I’m really excited to have Brooke join us in driving one of my Vynorius Piledriving/ Hedges Excavation No.19’s,” said team owner Bobby Webber Jr. “Hopefully we will all get to know each other during Speedweeks where our team driver Bryan Kruczek and Brooke will both be running Jason Boyd prepared Sportsman. I’m looking forward to potentially pairing up with Brooke to run more races here in the Northeast next summer and beyond.”

Storer explained that the deal came together quickly, as Webber Racing team officials had made up their mind to put her in the car after watching footage of some of her previous Wheel Man Series starts on Speed51.TV.

“It’s almost unheard of today to see racers given a ride based off of perceived skill,” Storer said. “For them to message me on Facebook and offer me the ride was nothing short of an honor. I really look forward to getting behind the wheel of the No.19 and using the opportunity to show the fans what I can do in a quality piece on the big stage.”

Coming off of three wins in the 2020 Brandon Ford Wheel Man Series season, Storer hopes to make racing Late Models a regular part of her 2021 campaign while still racing at home in her family-owned sportsman.

“I’ve raced everything from Sportsman to Super Late Models, Late Model Stocks to Outlaw Stocks. Now I get the opportunity to race an ACT Late Model,” Storer continued. “That’s pretty cool. I hope that my experiences translate into a quick understanding of the ACT car.”