Check out this past weekend’s race results and stories from Seekonk Speedway in Seekonk, Massachuesetts… 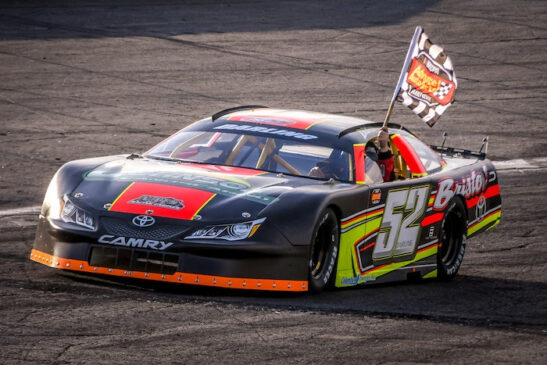 SEEKONK, Mass. — The new racing year kicked off with a very familiar start in the Pro Stock division on opening day at Seekonk Speedway, as Dave Darling took the first step in his quest for eight track championships with a victory on Sunday afternoon, May 2.

Darling, who won eight times in 2019 – including the season-opener – nearly saw his chance for another checkered flag thwarted by Mother Nature, as some unforeseen showers popped up prior to the final race of the afternoon. But, once the skies cleared after a brief delay, with a rainbow appearing over turn two, Darling wasted little time moving up from his starting position of fourth to the front, and was victorious in the opener of the NASCAR Advance Auto Parts Weekly Series season.

Bobby Pelland sat on the pole to begin the 45-lap feature, and battled with Mike Brightman for the top spot during the first few laps. Brightman was able to clear Pelland for the lead after three laps, with Darling peaking to the outside to pounce if Pelland gave even the slightest of openings early on. The top two continued to fight for positioning until both cars swapped paint, which hurt Pelland’s momentum and allowed Darling to take over the second spot.

Darling passed Brightman for the lead on lap 13 and never looked back, while Ryan Kuhn and Tom Scully Jr. began a march from their middle-of-the-pack starting spots to quickly move up the field. Kuhn made it past Brightman to claim second place with 18 laps remaining, and Scully Jr. progressed to third on lap 30, with his own pass of the No. 27 car.

Dylan Estrella and Kenny Spencer, who also started outside of the first four rows, claimed fourth and fifth respectively, with both putting in passes on Brightman within the final 10 laps of the race. Rick Martin finished sixth, followed by Ryan Vanasse – who finished second earlier in the day in the Late Model race – and Fred Astle. Pelland (ninth) and Brightman (tenth) were unable to finish off their great starts but did land in the top 10 in a race that saw zero cautions to close out the first event of the season at Seekonk Speedway.

The Pro Stocks return to action on Saturday, May 8, with a 40-lap feature as part of the NASCAR Advance Auto Parts Weekly Series. Due to limited capacity restrictions, advanced tickets will be on sale at seekonktickets.net on Tuesday, May 4 at 10AM. 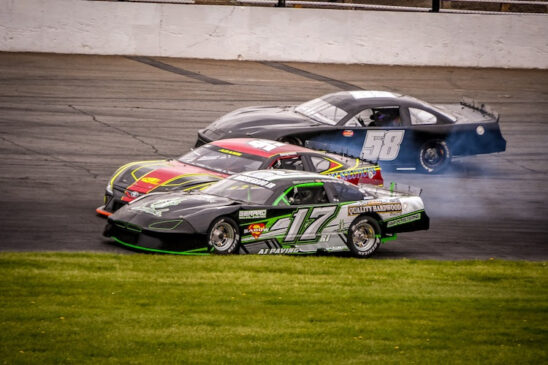 SEEKONK, Mass. — Vinnie Arrenegado needed all five of the extra “Power 5” laps added to the Everett’s Auto Parts (Brockton, MA) Late Model feature to catch Tommy Adams and produce a wild finish for his first win of the new season at Seekonk Speedway. Arrenegado entered this year on fire, ending 2019 – the last full season at Seekonk – with three wins and a second-place finish, and took the victory (and a little bit of the infield grass) on the last lap over Adams and Ryan Vanasse.

Adams nearly went wire-to-wire for the win, as he led 17 other cars out to begin the race and held the lead until the final couple of turns. Arrenegado made a late run-on Adams during the final lap, with the two coming together on the exit of turn two. They battled both their cars and each other in a feverish attempt to make it to the finish line, but Adams ended up spun out near turn four, while Arrenegado somehow staved off Vanasse to pick up the victory.

Adams and Arrenegado began the race side-by-side on row one, and Adams wasted little time to snag the top spot on the first lap. Both Vanasse and Gerry DeGasparre Jr. passed Arrenegado within the first five laps, and the quartet raced single-file for the majority of the contest until the caution flag waved on Lap 22. The yellow came after Chase Belcher and Josh Hedges made contact while battling for fifth place alongside Charlie Rose and Ryan Morgan, with Belcher coming to a halt near turn two.

After the restart, Adams promptly took over the reins at the front, clearing Vanasse for good during lap 25. Arrenegado vaulted back into second soon after, but Adams looked as if he was going to coast to a win until the final few laps. Lapped traffic gave Arrenegado the opportunity to close the gap, and set the stage for the theatrics in the final couple of turns.

Vanasse, who did a great job avoiding the two dueling vehicles in front of him during the final few turns, came in second place, followed by DeGasparre Jr., Hedges, and Morgan. Rose, Ryan Flood, Mark Hudson, Paul Lallier, and Jeramee Lillie rounded out the top 10.

The Everett’s Auto Parts (Brockton, MA)Late Models return to the track on Saturday, May 8, with a 30-lap feature as part of the NASCAR Advance Auto Parts Weekly Series. 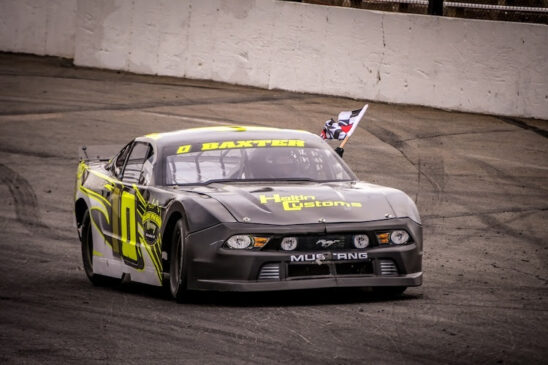 SEEKONK, Mass. — A caution midway through the 30-lap Helger’s South Coast Power Equipment Sportsman Feature on opening day at Seekonk Speedway seemed to be just what the doctor ordered for Chad Baxter, as he ran away with a victory after a tightly contested first half of the race. The race was a Power 5 battle for the Sportsman — five extra laps more than their normal distance due to sponsorship from South Coast Power Equipment in the opener of their NASCAR Advance Auto Parts Weekly Series season.

Baxter, riding in the No. 0 car from Pascoag, R.I., was entrenched in a lengthy battle with Joe Kohler, Kyle Casper, and Corey Fanning for the top spot from the drop of the green flag. Casper and Kohler began on the front row, and dueled throughout the first 10 laps before Kohler was finally able to take over the top spot. Baxter showed patience, lurking in third, while making several attempts to take over both second and first. The top four traded paint several times, including on lap five, where Baxter checked up after a run which caused the cars behind him to become close acquaintances.

Baxter made the pass on Kohler on lap 13, but still had the North Scituate, R.I. native in the No. 43 car near his back bumper when the caution came out at the halfway point in the race. Rob Kohler and Doug Benoit made contact and spun out into the infield grass across from the start/finish line, while Mark Healy and Kevin Rioux also swapped paint as well. The race was halted for several minutes while Benoit’s car was restarted and Kohler’s vehicle was towed off due to extensive front and right-side damage.

Once the dust settled and the feature was restarted, Baxter wasted little time in stretching out a lead. Kohler and Fanning, who lined up second and third respectively after the caution, traded paint near turn four on the first restart lap, with Kohler taking second and never looking back. Fanning eased into third, where he would remain, while the trio of Adam Petty, Chris Gomes, and Craig Pianka battled for fourth with 10 laps left. Steve Axon, who needed to use the consolation race in order to qualify for the feature event, made his way up through the field and made the trio for fourth a quartet in the last few laps of the race.

Baxter eased his way to the checkered flag, stretching out to a nearly two-second gap at the finish, with Kohler, Fanning, Pettey, and Axon – who started 21st in the 24-car field – rounding out the top-five. Gomes, Ed Perry, Colby Lambert, Pianka, and Dave Gargaro Jr. finished in the top 10.

The Helger’s South Coast Power Equipment Sportsman return to the track on Saturday, May 8, with a 25-lap feature event in the NASCAR Advance Auto Parts Weekly Racing Series.