HIGH POINT, N.C. (April 19, 2022) – Veteran NASCAR crew chief Gil Martin has joined Silver Hare Racing as its director of competition, overseeing all aspects of the team’s racing efforts in the Trans Am Series presented by Pirelli.

Martin has served as a crew chief for more than 650 NASCAR races dating back to 1992. He was the first crew chief to score wins in all three of NASCAR’s top national touring series – Cup, Xfinity and Camping World Truck. Martin now brings that wealth of experience to Silver Hare Racing, a Trans Am staple that in 2022 fields an entry for 15-year-old rising star Connor Zilisch and another for three-time TA2 Masters champion Maurice Hull, the co-owner of the team with his wife, Laura.

“We are truly delighted to welcome Gil to the Silver Hare Racing family as we continue building our team with an eye on establishing ourselves as an elite road-racing organization,” said Laura Hull, who also serves as Silver Hare Racing’s team manager. “The wealth of knowledge Gil brings to our team and his decades of experience competing at the highest levels of racing, with some of the biggest names in motorsports, will be instrumental in helping develop young racers like Connor and for making our overall program stronger.”

Silver Hare Racing leverages its Trans Am effort to promote its arrive-and-drive program, where aspiring racers and even tenured professionals hone their road-racing skills on some of the most revered tracks in North America. NASCAR Cup Series drivers Daniel Suárez, William Byron, Harrison Burton and Christopher Bell have all wheeled Silver Hare Racing-prepared cars to burnish their road-racing abilities.

“Maurice and Laura have built a solid foundation with all that they’ve done and the successes they’ve had, and I’m looking forward to being a part of a great opportunity to build on that foundation and take it to the next level,” said Martin, a native of Nashville, Tennessee. “Our goal for Silver Hare Racing is to be a showcase team. Nobody in the organization is wanting to just show up and simply be a part of the Trans Am garage. They’re wanting to stand out, and Maurice and Laura have shown they’re willing to step up and do whatever it takes to do that. I admire the dedication they have for the series and how they’re looking to keep moving it forward.”

Silver Hare Racing offers six, professionally built and maintained TA2 chassis from Howe Racing for both competition and private testing. Silver Hare Racing has a dedicated, fulltime crew and operates out of a state-of-the-art facility in High Point, North Carolina. At the track, two 53-foot Featherlite transporters serve as the team’s base, each outfitted with a lounge and smart TVs for data and video review, as well as for hospitality.

“The team already has a couple of really good guys as car chiefs – Derick Jennings and Jeff Holley,” Martin said. They’re both doing a great job. And bringing Connor on board by way of Kevin Harvick’s KHI Management organization – the talent Connor showed when I saw him on the Roval at Charlotte, it was 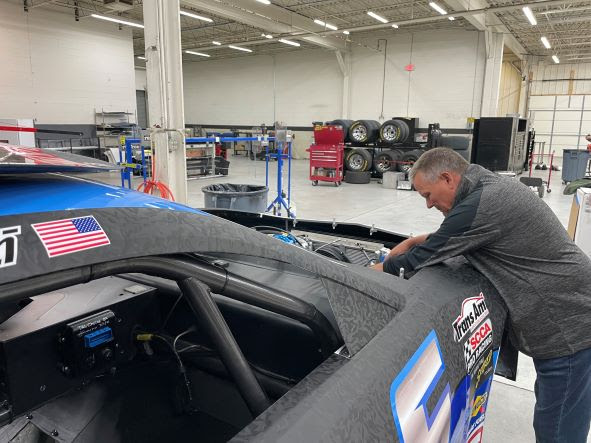 pretty amazing how well he carried himself, especially as a 15-year-old. With KHI being involved with Connor, and the things Maurice and Laura are doing, Silver Hare Racing has got some really good potential.”

“Growing with Connor and getting more of the right people on board to where they can function as a world-class organization, the foundation is there,” Martin said. “We’re just going to add a few more parts and pieces.”

With three of 12 races complete on the 2022 Trans Am calendar, Silver Hare Racing heads to back-to-back West Coast races – April 24 at WeatherTech Raceway Laguna Seca in Monterey, California, and May 1 at Sonoma (Calif.) Raceway.

In the series’ most recent race March 26 at Michelin Raceway Road Atlanta in Braselton, Georgia, Zilisch drove to a sixth-place result and Maurice Hull was the top finisher in the Masters class. En route to his sixth-place drive, Zilisch earned the Omologato Fastest Lap of the Race Award for the second straight race, as he first won the award the week prior at the Charlotte (N.C.) Motor Speedway Roval.

“With NASCAR having so many more road-course races, it’s our goal for Silver Hare Racing to be the preferred team for drivers to get that road-course experience,” Laura Hull said. “We want to be that important step in the ladder for the young, up-and-coming drivers like Connor. The addition of Gil into the mix is undoubtedly a huge step in the right direction for us, and we’re excited about the prospects of where his knowledge and experience can take us.”

Silver Hare Racing is a fulltime competitor in the TA2 division of the Trans Am Series presented by Pirelli. The multicar team has won the TA2 Masters class championship three times (2018, 2019 and 2020) with driver and team co-owner Maurice Hull. Under the leadership of Hull’s wife, co-owner and team manager Laura Hull, Silver Hare Racing provides a variety of services that includes private testing and arrive-and-drive programs. The team offers six, professionally built and maintained TA2 chassis from Howe Racing and operates from a state-of-the-art facility in High Point, North Carolina. For more information, please visit SilverHareRacing.com.