(Stafford Springs, CT)—Stafford Speedway welcomed the Superstar Racing Experience back for another visit to the Connecticut half-mile facility that was shown live on CBS.  Ryan Newman took the lead from Marco Andretti with 5 laps to go in the 75-lap feature event and went on to take down the checkered flag.

Marco Andretti and Paul Tracy led the field to the green flag with Andretti taking the early lead.  Greg Biffle quickly overtook Tracy for second place with Tony Stewart in fourth and Michael Waltrip in fifth place.  Stewart took over third place from Tracy on lap-9 as Andretti continued to show the way out front but Biffle was closing in on his back bumper after Andretti had stretched out his lead in the early laps.

Andretti, Stewart, and Biffle nearly went 3-wide for the lead on lap-12 with Andretti maintaining the lead.  Stewart made his move to the inside of Andretti to take over the lead o nlap-17 but Andretti came right back to the outside of Stewart and they raced door to door for the lead.  Andretti got clear of Stewart on lap-22 after 4 laps of side by side action with Biffle, Tracy, and Waltrip making up the top-5.  Biffle went back by Stewart on lap-23 to move back into second place while Andretti continued to lead the race.  The caution flew with 33 laps complete with Andretti still leading Stewart, Biffle, Waltrip, and Tracy. 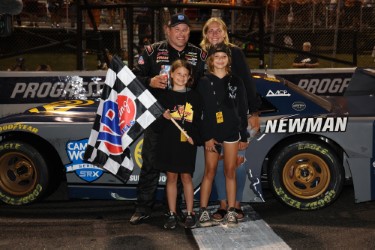 Stewart took the lead on the lap-51 restart while Biffle took a trip through the backstretch grass but saved the car and the race stayed green with Biffle sliding to the rear of the field.  Andretti was second behind Stewart with Ryan Newman up to third, Tracy fourth, and Bobby Labonte fifth.  Andretti was applying all kinds of pressure to Stewart for the lead but was unable to make a pass.  Andretti was finally abel to take the lead from Stewart by a nose at the line on lap-63.

Andretti took the lead on the lap-66 restart with Newman moving up to second as Stewart slid back to third.  Tracy was fourth and Bobby Labonte was fifth, just in front of Hailie Deegan.  Stewart fell back to fourth on lap-68 as Tracy moved up to third place.  Newman dove to the inside of Andretti on lap-70 to move into the lead with 5 laps to go. Newman led the final 5 laps to take the victory.  Andretti finished second with Tracy, Stewart and Labonte rounding out the top-5.

For more information contact the Stafford Motor Speedway track office at (860) 684-2783, or visit us on the web at http://www.staffordspeedway.com.