CONCORD, N.C. – Sam Hunt Racing and Boston’s Kaz Grala have plenty in common. Both have been piecemealing seasons together, impressing with their potential but waiting for the right opportunities.

Their opportunities are here and happen to be one and the same.

The program will also field the No. 24 Toyota full-time in 2023, anchored by driver Connor Mosack, who will pilot the car for 20 races beginning at Phoenix Raceway in March. This marks the first time the organization will field two cars full-time.

Grala, a journeyman driver across NASCAR’s three national series since 2016, made his debut for the team in the 2022 season finale at Phoenix Raceway, his 10th start of the season. The upcoming year marks his first full-time NASCAR ride since a Truck Series campaign in 2017 that produced his first national victory at Daytona International Speedway.

Eight years after running against Hunt in what is now the ARCA Menards Series East, Grala was beaming Thursday, relishing the moment in front of hi 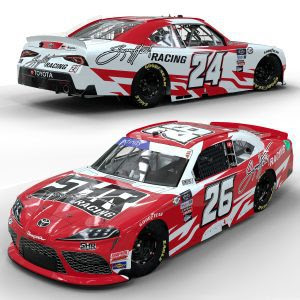 “I’ve thought about this for years, and each year, wanted this to fall in place for me and it finally has,” Grala told NASCAR.com. “I feel like the trials and tribulations over the last few years have really made me appreciate this sport, how difficult it is and how important it is to me – how passionate I am about it.

“And that all makes this exact situation that much sweeter, you know? Sam Hunt Racing is such a great place to me. Great environment. They’ve got really talented people. Great support from Toyota. I feel like I’m in a really good place here to have a great opportunity next year.”

Hunt, who finds himself the owner of a two-car Xfinity Series team at age 29, stood in awe of the moment Thursday as his team continues to grow. In May, Hunt employed just 12 full-time workers. He said he’ll end up with “20-plus” heading into 2023, with people eager to come work for his company.

“It’s massive. It’s a huge moment for the team,” Hunt told NASCAR.com. “I think having a guy like Kaz, who has really had to fight and claw for opportunities the last couple years […] I think he’s a guy who’s gonna give every ounce of his effort because like me, our opportunities when we do get them, we’ve got to execute.

“And he’s an experienced guy, which is good. He can be a good leader for our team.”

Grala will be paired with crew chief Allen Hart, who enters his second season atop the pit box after eight years as an engineer at JR Motorsports. In his rookie season as the top shot-caller, Hart had to navigate the personalities and preferences of 10 different drivers.

“As an engineer, I don’t know that I had 10 different drivers my whole career,” said Hart, whose more than 15-year involvement in NASCAR involved working with Dave and Ryan Blaney at Tommy Baldwin Racing before teaming with Justin Allgaier and Regan Smith at JRM. “I grew a lot (in 2022). I think it helped me understand and (spotter Chris) Lambert and I, we grew a lot as a team and as friends over the season. It really made you lean on your core group and your core setup and all those things that make your group better.”

Now Hart and Co. can zero in on Grala, whose resume includes a Cup Series top-10 in the No. 3 Chevrolet for Richard Childress Racing in his debut on the Daytona International Speedway road course and a Craftsman Truck Series victory on Daytona’s superspeedway layout in 2019.

Joining the team for over 60% of the 2023 schedule is Mosack. In addition to two Truck Series starts, Mosack made his inaugural two Xfinity starts in 2022 – one in Joe Gibbs Racing’s No. 18 Toyota and one in Hunt’s No. 26 Toyota – at Portland International Raceway and Watkins Glen International, respectively. Mosack also made eight starts in the ARCA Menards Series in 2022, scoring four top fives and seven top 10s.

The 23-year-old Charlotte, North Carolina native only began racing at age 18 and is best known for his abilities on road courses. The 2020 CARS Tour Rookie of the Year was notable in the Pirelli TransAm TA2 series, competing full-time in 2022 as he netted a Watkins Glen win, six pole positions and five podium finishes.

Hunt was quick to shower the rookie driver with praise on Thursday and offer his full support, noting the duo were introduced by Coy Gibbs, the late vice chairman and chief operating officer of Joe Gibbs Racing who died Nov. 6 after his son, Ty Gibbs, won the Xfinity Series championship.

“I met Connor last year actually through Coy and met Connor and his mom and his family,” Hunt recalled Thursday, “and I remember going home to my wife, Noelle, and just saying, ‘These are the kind of people we want in our lives.’ Connor has every attribute that we could want in a person and in a driver.”

Mosack said he got to know Coy Gibbs as a family friend at the end of 2020, a friendship that led to Mosack’s series debut at Portland in the JGR No. 18 in June. Now, Mosack sits prepared for a 20-race slate in the NASCAR Xfinity Series with Sam Hunt Racing, which believes in Mosack enough to be the primary driver of the No. 24 Toyota.

“That means a lot to me,” Mosack said. “I’ve had some ups and downs in my career and had some good runs and struggled in some cars. So, to have someone support me like Sam and the guys on the team means a lot to me and it’s obviously a good confidence booster, and that means a lot going into a new car and new team.”

Sam Hunt Racing debuted in the 2019 Xfinity season finale at Homestead-Miami Speedway with driver Colin Garrett behind the wheel. The team immediately impressed with a 15th-place qualifying effort en route to a 21st-place finish. Nemechek has scored each of the team’s three top-five finishes – a third-place result at Richmond Raceway in 2021 remaining Sam Hunt Racing’s best finish yet.

“Timing and patience have been pivotal components of our growth process at SHR,” Hunt said in a release. “Expanding to two full-time teams in 2023 brings an excitement level only matched by the responsibility and expectation to compete at a high level every week. It goes without saying that having a full-time driver in the No. 26 for the first time is a blessing to our organization and an important component of our growth. Kaz is a highly talented and experienced driver and has strived for an opportunity like this for a long time.

“Having Connor anchor the No. 24 team is something we are also really looking forward to. He is a very talented young man and has every trait and characteristic I look for in a young driver. We’re heading into 2023 with confidence in both teams and drivers, and I’m excited to continue.