CONCORD, N.C. (December 20, 2022) – One of the most powerful and inspirational speeches across the American sports landscape was given at the inaugural ESPY Awards on March 4, 1993, when Jim Valvano was presented the Arthur Ashe Courage Award. There, he addressed an audience filled with his friends, family and contemporaries. Of course, Valvano had been diagnosed with terminal cancer – the award an acknowledgement of his condition – and passed away less than two months later.
During that speech, Valvano announced the creation of the Jimmy V Foundation for Cancer Research. It’s motto: “Don’t Give Up. Don’t Ever Give Up.”

Eighteen years later, nearly to the day, 12-year-old Jessica Joy Rees – known to those who loved her as simply Jessie – was diagnosed with terminal brain cancer and given just 12-to-18 months to live. As her mom and dad grappled with the news few can comprehend and considered treatment plans that would be extraordinarily taxing to their daughter’s young body, Jessie wasn’t thinking about herself. No, Jessie was thinking about others.

In those moments, Jessie was inspired to spread love, hope and most importantly care to her fellow pediatric cancer patients at Children’s Hospital of Orange County (Calif.) when she created Jessie’s JoyJars®.

Each JoyJar comes complete with Jessie’s own take on Valvano’s famous words: “Never Ever Give Up.”

From those empowering words, the Jessie Rees Foundation was born and its motto took the form of the acronym NEGU. Its mission is to encourage every kid fighting cancer to never ever give up.

In support of that mission, Spire Motorsports and Corey LaJoie, through the backing of a private philanthropic foundation, have partnered with the Jessie Rees Foundation to serve as the primary sponsor of LaJoie’s No. 7 Chevrolet Camaro ZL1 for six NASCAR Cup Series races in 2023.

“The Jessie Rees Foundation is incredibly honored to be the primary sponsor of Spire Motorsports and Corey LaJoie’s No. 7 Chevrolet for six races during the 2023 NASCAR Cup Series season,” said Erik Rees, Jessie’s proud dad and co-founder of the Jessie Rees Foundation. “This exciting partnership will not only expand awareness of our mission to encourage kids and families impacted by childhood cancer to ‘Never Ever Give Up,’ (NEGU) it will allow us to deliver JoyJars to kids fighting cancer throughout the season with Corey and his team.  In addition, we are extremely humbled by the unwavering generosity from a donor’s foundation, who wish to remain anonymous, to allow this partnership to take place.  Together we will keep curing bad days caused by childhood cancer.”

The Team NEGU paint scheme will be featured aboard LaJoie’s No. 7 Chevrolet at the following races in 2023:

The Jessie Rees Foundation fulfills its mission by connecting with families, bringing awareness to their stories, offering them a network of helpful resources and sending the entire family continual doses of encouragement throughout their journey.

Its national vision is to become a symbol of help and hope in the childhood cancer space so every child fighting cancer and their families have the support and encouragement to never ever give up during their courageous fight. The global vision is to be able to say “yes” to any children’s hospital request for Jessie’s JoyJars.

“Thanks to some very generous individuals with big hearts, I’m fortunate enough to spread the mission of NEGU and help bring joy and hope to pediatric cancer patients across the country,” said LaJoie. “As Christmas approaches, it’s important to remind myself and anyone who will listen, there are so many courageous families fighting a battle like no other. During this Christmas and holiday season, I’m encouraging my friends, family and fans to contribute to the Jessie Rees Foundation by sponsoring a JoyJar and help bring a smile to the face of a child who is fighting cancer.

“As part of our partnership, I’ll spend some time visiting hospitals with pediatric cancer units to offer love, encouragement and hope to those who can use it the most. We have a special opportunity and we’re going to make the most of it.”

To learn more about the Jessie Rees Foundation and sponsor a JoyJar, please visit negu.org/coreylajoie or simply scan the QR Code below. 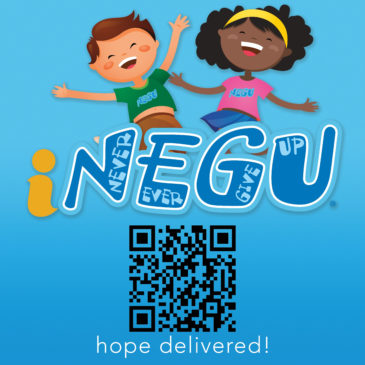 Today, her legacy lives on through the Jessie Rees Foundation.  Due to the generosity of thousands of people, companies, and volunteers, over 430,000 JoyJars have been sent to kids fighting cancer in all 50 states and over 52 countries.  While the Jessie Rees Foundation does not focus on curing cancer, they do cure bad days caused by childhood cancer with hope, joy, and love. Join Team NEGU today at http://www.negu.org.

Note: Corey LaJoie is the son of two time Xfinity Champion Randy LaJoie who grew up in Norwalk, CT.