MOORESVILLE, N.C. (Sept. 1, 2022) – JR Motorsports today named longtime crew chief Mike Bumgarner to its director of competition role. Bumgarner, currently the crew chief for Josh Berry and JRM’s No. 8 team, will assume the position at the conclusion of the 2022 season. 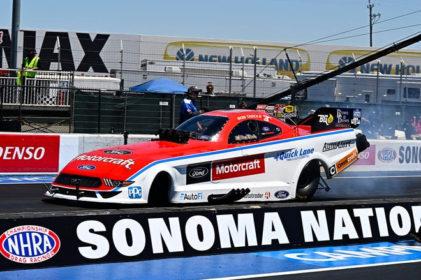 SONOMA, Calif. — Bob Tasca III and the Motorcraft/Quick Lane Funny Car team won the NHRA Sonoma Nationals on Sunday night. It was his first victory of the season and 10th in his career in the Nitro Funny Car class.

N. Woodstock, NH — This Saturday, June 25th the Woodsville Guaranty Savings Bank Strictly Stock Minis are the stars of the show with their annual 50-lap special. The 50-lap extravaganza for the longtime 4-cylender class is the longest distance for the Woodsville Savings Bank-sponsored division all year, and with a $500 top prize for the winner, it’s the richest race for them too!

BECHTELSVILLE, PA. – Grandview Speedway management would like to answer some questions that may have arisen from the recent announcement regarding the 602 crate Sportsman mini-series. Nothing is changing regarding the use of 602 engines in the regular Saturday night NASCAR Sportsman competition. Race teams are still able to use the 602 engines as they have been for the last several seasons, and are encouraged to do so, looking toward the future of the class.