N. Woodstock, NH — As Saturday approaches, so does the beginning of the end of the 2022 season with the closing of the first championship. After two stellar rounds already this season, the J.P. Sicard Flying Tiger Triple Crown Series will be determined by the final event this Saturday, August 13th. After simply dominating the last five, yes five, extra-distance Wells River Chevrolet Flying Tiger events at White Mountain, it’s Shane Sicard’s championship to lose, and that isn’t entirely out of the question. 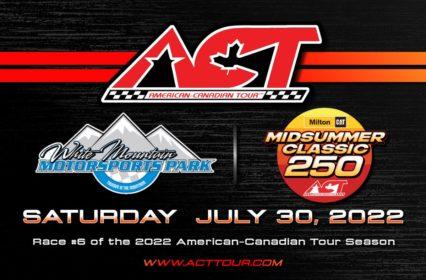 N. Woodstock, NH — Alongside the epic $10,000-to-win Milton CAT Midsummer Classic 250 for the American-Canadian Tour, four local divisions at White Mountain Motorsports Park are ready to wow the crowds on hand and the fans at home on Racing America. Just as exciting is that MAV-TV will be recording the racing events for a winter broadcast on national television!