(Stafford Springs, CT)—Stafford Speedway hosted another round of Stafford Weekly Racing on Friday, August 19th with Open Modified cars on hand for the Lincoln Tech Open 80.

(Stafford Springs, CT)—Open Modified cars returned to Stafford Motor Speedway for their second of five visits of the 2022 season on Friday, May 20th for the Call Before You Dig Open 81.  Ronnie Williams took the checkered flag with a dominant drive to outlast Woody Pitkat over the final laps. 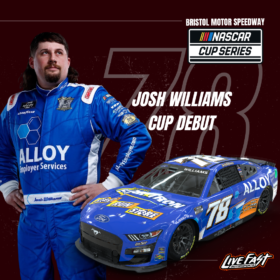 Thompson, CT — Tolland, CT’s Ronnie Williams made it two in a row with the Outlaw Open Modified Series by capturing the Twisted Tea Tripoint Showdown 75 at Connecticut’s Thompson Speedway Motorsports Park on Wednesday, September 15. Williams followed a similar script to his Midsummer 75 victory in August by coming on strong late in the going to take home another $5,000 top prize at the final tune-up for the $20,000-to-win Thompson 300.