For decades people in southern Virginia and beyond knew Ray Lee Wood for the beautiful flowers growing in front of his home in the community of Buffalo Ridge and for the sourwood honey that he collected from his beehives.

They knew of his prized Persian cats and Siberian Huskies, and the goldfish he raised in ponds on his family property.

Others were amazed at his knowledge of the Bible and his loyalty to the Pentecostal Holiness Church.

And there were some that knew the rest of the story, about how Wood was an integral part of some of the grandest triumphs in motor racing history – among them victories in the 1963 Daytona 500, the 1965 Indianapolis 500 and the inaugural American 500 at North Carolina Speedway in Rockingham in 1965.

Ray Lee Wood, who died May 5 at the age of 92, was the third son of J. Walter and Ada Wood. In the early 1950s, he and his brothers Glenn, Clay, Delano and Leonard, took on the world of automobile racing with the same passion and determination that they applied to every task they ever took on.

Early in the Wood Brothers’ career, they worked on their race cars under a giant beech tree, its limbs serving as support for pulling engines with a chain hoist. Ray Lee Wood spent the last half of his life serving as caretaker of the famous tree, one that attracted visitors including Edsel Ford II.

As the team began competing in the series now known as Cup, Ray Lee changed front tires and helped prepare the Fords initially driven by his brother Glenn but later driven by some of the biggest names in motorsports.

Leonard Wood said his brother could have added his name to that list had he chosen to do so.

“Ray Lee could have been a race driver as well as Glenn,” he said. In 1958, on the sands of Daytona Beach, Ray Lee hit 142 miles per hour on the measured mile in a hopped-up street car, topping the speed chart for that day.

When the Wood Brothers won the Car Owner’s Championship in 1963 using multiple drivers, Ray Lee Wood was the car owner of record and the Championship trophy bears his name.

When the Woods scored the first of their five Daytona 500 victories, with Tiny Lund filling in for a badly burned Marvin Panch, Ray Lee played a key role in the team’s winning pit strategy.

After the first 10 laps of the 500 were run under the yellow flag because of rain, the Woods saw an opportunity to play a pit strategy similar to those used in road-course races today. They began making their pit stops with the intention of making one fewer stop than their competitors.

They also were hoping to run the race on a single set of tires.

Firestone representative John Laux and Ray Lee were in charge of checking the tires. Both agreed on each early stop that the tires were good to go.

On the final stop, Laux wasn’t so certain. Ray Lee said the tires were good for another 100 miles. His brothers took his advice, and Lund drove on to the checkered flag. 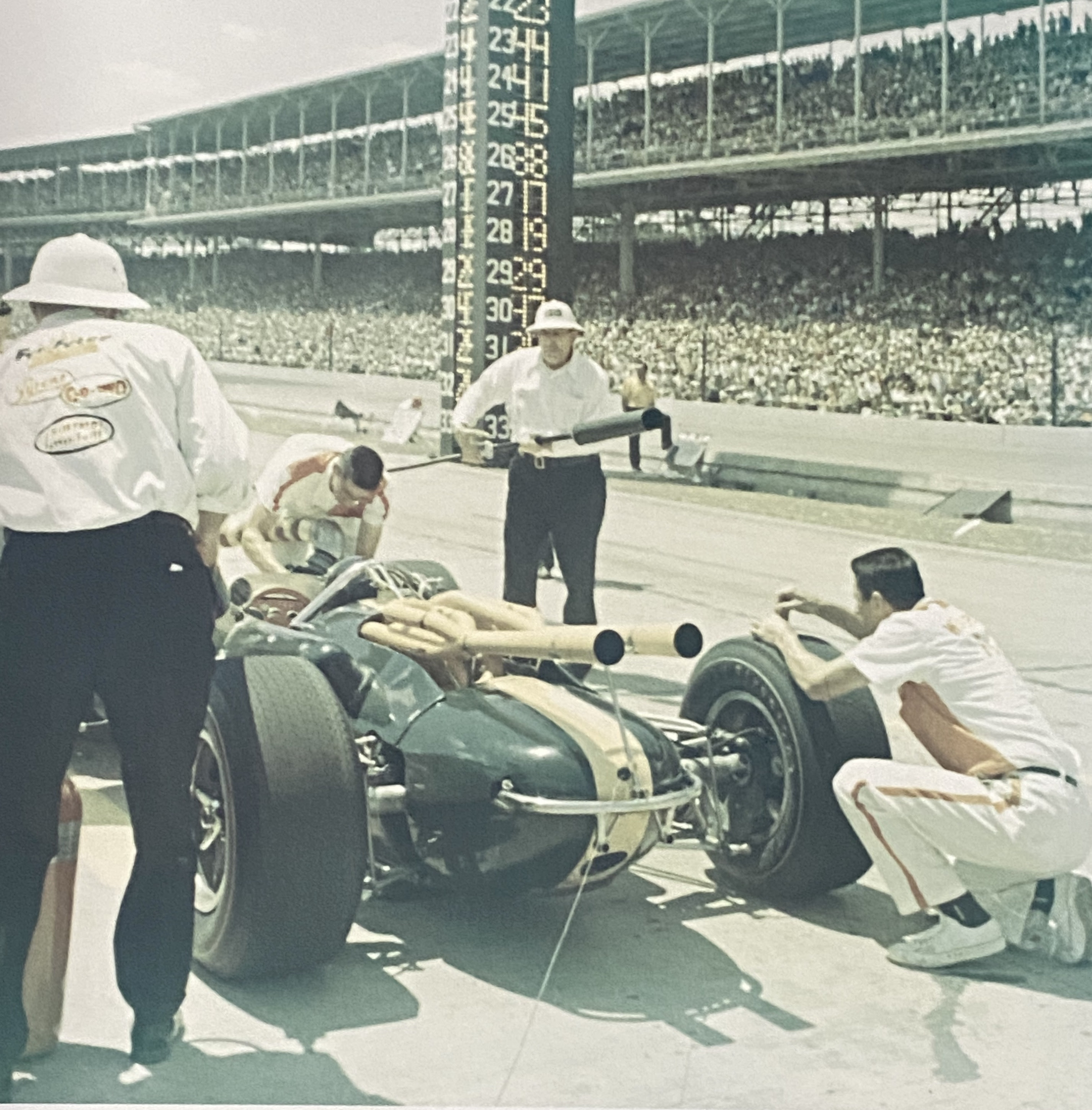 Wood played a similar role in the Indianapolis 500, as he and his brothers pitted the Lotus Ford driven by Jim Clark. Again, Wood checked tires on each stop, and again the call was made to continue. The result was another major win for the Stuart, Va.-based team.

That trip to Indianapolis was a life-changer for Wood.

“When we were up there in Indiana, I felt the calling of the Lord,” Wood said in a 2010 interview. “He had something else for me to do.”

It was the same calling his brother Delano, the family jack man, would feel at the end of the 1983 season.

Not wanting to leave his brothers in mid-season, in an era when good tire changers were hard to find, Ray Lee decided to stay on through the end of that year.

His racing career ended in storybook fashion, with his old friend Curtis Turner driving the Woods’ Ford to victory at Rockingham.

Wood and Turner had become close over the years, and Wood often flew back from races with Turner, so he could be back at work with his grading business on Monday morning.

That race, Turner’s 17th and final Cup win, also was the final NASCAR appearance for Ray Lee Wood, who began spending his Sunday’s at his beloved church, located near his home in Buffalo Ridge.

In the years after that, he never attended another NASCAR race, although he did participate in a Fan Appreciation event at the Wood Brothers Museum in 2011.

His nephew Eddie Wood said that in a family of cool brothers, Ray Lee stood out.

“He had the coolest cars,” Eddie Wood said. “He had lots of girlfriends. He had one of the first color TVs in our county. He was just a happy-go-lucky guy.”

Like his brothers, Ray Lee didn’t do things halfway.

“He started a rose garden, and the next thing you know he had 500 of them, and then a thousand,” Wood said. “He bought two expensive Persian cats, Sam and George, and kept getting more until he had 50 show cats.

“He got into Siberian Huskies and had giant goldfish… Whatever he did, he went at it 100 percent.”

Ray Lee Wood lived in the same house where he grew up, and in his latter years was content with a simple life, far removed from the cheering crowds and checkered flags of his early years.

“He was just laid back, in no hurry,” his nephew Len Wood said. “Nothing ruffled his feathers.”

With his racing career behind him, Ray Lee was close to his sister Crystal and his church family, and remained supportive of the racing side of his family.

“Ray never went back to the track after 1965, but he supported us all the way and always followed our races on the radio or TV,” Leonard Wood said. “He was a great brother and a great all-around person.

“I can’t say enough good words about him.”

Wood Brothers Racing was formed in 1950 in Stuart, Va., by Hall of Famer Glen Wood. Wood Brothers Racing is the oldest active team and one of the winningest teams in NASCAR history. Since its founding, the team won 99 races (including at least one race in every decade for the last seven decades) and 120 poles in NASCAR’s top-tier series. Fielding only Ford products for its entire history, the Wood Brothers own the longest association of any motorsports team with a single manufacturer. Glen’s brother, Leonard, is known for inventing the modern pit stop. The team currently runs the Ford driven by Paul Menard in the famous No. 21 racer.