SAINT CHARLES, ILL. (January 17, 2023) — As AO Racing makes their IMSA WeatherTech SportsCar Championship debut this month at the Roar Before the 24 and Rolex 24 At Daytona, the team will pay special tribute to a previous race winner highlighting the livery of the No. 80 Porsche 911 GT3 R.

The new GTD class team will begin the season racing the livery of the 1983 race-winning Porsche, the No. 6 Swap Shop ANDIAL Porsche 935, driven by Preston Henn, AJ Foyt, Bob Wollek and Claude Ballot-Lena. The livery has a personal connection to not one, but two of the 2023 drivers. PJ Hyett currently owns the historic 935 on which Gunnar Jeannette’s father, Kevin, was the crew chief. The car was built by motorsport legend Alwin Springer, former president of and now consultant to Porsche Motorsport North America.

“I’ve literally grown up around the Swap Shop 935, Preston Henn and Alwin Springer,” reflected Gunnar Jeanette. “To have PJ acquire the car from the Henn Family and for us to be able to do this tribute at our first 24 Hours with AO Racing and Porsche is very special. I hope all the fans can enjoy the livery and get to know the special story which this car helped create in 1983.” 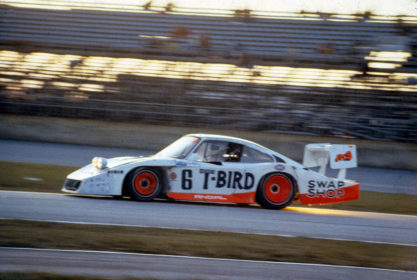 Forty years ago, the 935’s attempt at what was then the 1983 24 Hour Pepsi Challenge at Daytona was anything but boring. Henn, an American entrepreneur and founder of Swap Shop, teamed with Frenchmen Wollek and Ballot-Lena for the 24-hour endurance racing event. Foyt joined the team mid-race after his original car, an Aston Martin-Nimrod NRA/C2, retired only 121 laps into the race. Though Henn jumped at the opportunity to put a 24 Hours of Le Mans and four-time Indianapolis 500 winner in the car, Wollek famously objected, noting his lack of experience in the Porsche 935, and a 15-year absence from sports car racing.

After a quick briefing on the car’s shift pattern from crew chief Kevin Jeannette mid-race, Foyt joined the fray, setting the fastest lap of the race in a downpour. In the end, the Swap Shop squad came back from two blown turbochargers and a 12-lap deficit to take the checkered flag with a six-lap lead. The events of the day created one of the more memorable and unique race wins in Rolex 24 history.

Hyett, American software developer and co-founder of internet hosting service GitHub, first met Jeannette through vintage racing. The pairing has come together as friends and co-drivers as Hyett continues to build his sports car racing career. The duo most recently finished in second place at the FIA World Endurance Championship’s 8 Hours of Bahrain with Ben Barnicoat completing the entry.

To mark the occasion, the original No. 6 Swap Shop ANDIAL Porsche 935 will journey to Daytona International Speedway this week alongside the No. 80 Porsche 911 GT3 R, 40 years after its momentous win. The pair of cars will have a special, on track side-by-side photo shoot before the modern entry begins the Roar Before the 24, the first official test of the 2023 IMSA WeatherTech season. The 61st Rolex 24 At Daytona begins on Saturday, January 28 at 1:40 PM, airing live on NBC for the first hour, or flag-to-flag on Peacock. For more information, visit imsa.com.