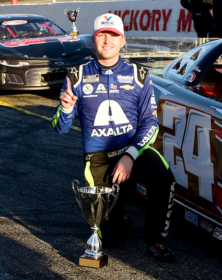 Hickory, NC – Cup Series star William Byron took a break from a busy weekend at Atlanta Motor Speedway to race his #24 Donnie Wilson owned Super Late Model in the second of two Easter Bunny 150s Saturday. Byron a former regular at the track did not attend Friday night’s event or even race at Hickory for the past seven years. Rust was a non-issue as he was able to lead 109 laps on his way to the victory by more than a half a second over Brandon Barker #88.

There may still be another night to go in the Easter Bunny 150s at Hickory Motor Speedway, but you wouldn’t have guessed it from the racing on night one.