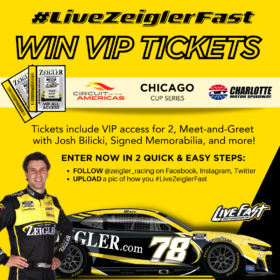 KALAMAZOO, MICH. (January 24, 2023) — Zeigler Auto Group today announced its season-long #LiveZeiglerFast fan engagement initiative in partnership with Live Fast Motorsports and Josh Bilicki. The major giveaway for the campaign will be two VIP tickets to the highly coveted Chicago Street Race in July with details on how to enter to be released at a later date.