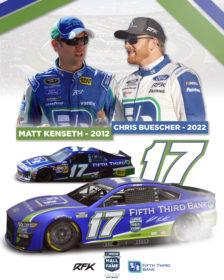 CONDORD, N.C. (Oct. 25, 2022) – RFK Racing and Fifth Third Bank will honor Matt Kenseth and his upcoming induction into the NASCAR Hall of Fame with a special paint scheme on Chris Buescher’s No. 17 Ford at the upcoming NASCAR Cup Series race at Martinsville Speedway. Kenseth, who scored Jack Roush’s first Cup championship in 2003, originally piloted the No. 17 Fifth Third Bank Ford in 2012 and this weekend’s scheme will be a nod to that originally livery.