SEEKONK, Mass. — Seekonk Speedway will celebrate champions from the 2021 season from both Fast Friday and NASCAR Advance Auto Parts Weekly Series Saturday next January. Two different banquets will be held to appropriately honor all of the champions, top-10 finishers and special award winners from all nine of Seekonk’s racing divisions. Rookie of the Year awards will also be handed out during these banquets for those divisions who are eligible.

New for this year, the banquets will move away from the Venus De Milo and will now take place at White’s of Westport, located at 66 State Road in Westport, Massachusetts. Tickets are now on sale to the general public by visiting http://www.seekonkspeedway.com and clicking on the banquet of their choice at top of the main page. Each ticket is $38 per person plus online fees. Tickets can also be purchased with assistance from our Office staff Monday thru Friday between 10 am and 4 pm by calling Dawn or Gail at 508-336-9959

Also new for this year, fans, teams and sponsors can pick the seat they would like to sit in at the awards ceremony by purchasing their tickets online. Dinner will be a traditional dinner buffet with a mix of different meats, a fish option, sides, and more. 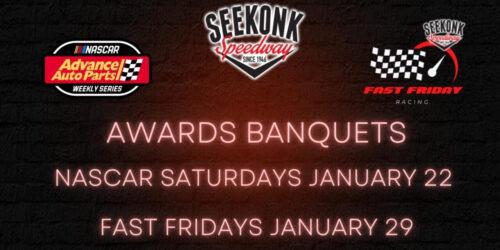 Seekonk Speedway is actively working on the 2022 schedule and will be released once available. For more information on Seekonk Speedway, visit SeekonkSpeedway.com and follow the track on social media for the latest updates.