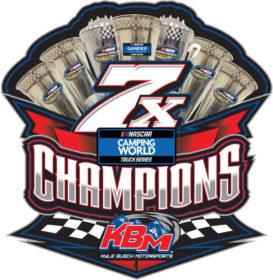 MOORESVILLE, N.C. (Nov. 9, 2022) – Kyle Busch Motorsports (KBM) announced today that veteran crew chief Brian Pattie will join the organization and will be atop the pit box for the No. 51 Chevrolet in the NASCAR Craftsman Truck Series beginning in 2023.

Daytona Beach, FL (August 26, 2022) – NASCAR and Stanley Black & Decker (NYSE: SWK), the world’s largest tool company and a leader in outdoor equipment, today announced American tool icon CRAFTSMAN® will return as the title sponsor of the NASCAR Truck Series beginning in 2023. After serving as the series’ title sponsor from its inception in 1995 to 2008, the NASCAR CRAFTSMAN Truck Series will make its homecoming at Daytona International Speedway on February 17, 2023.