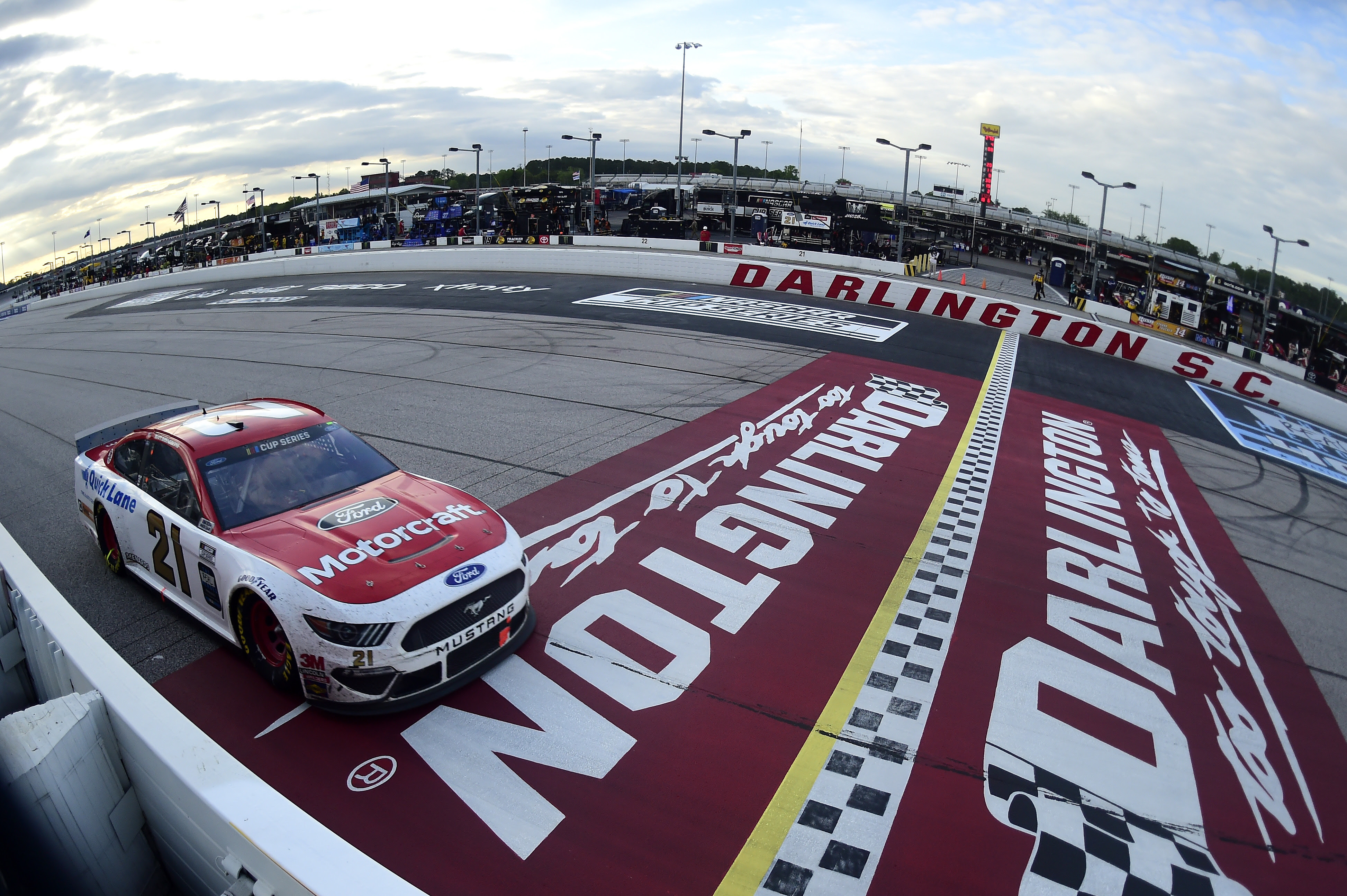 Matt DiBenedetto and the No. 21 Motorcraft/Quick Lane team head back to Darlington Raceway Wednesday night for an encore performance with the Lady In Black.

DiBenedetto finished 14th in this past Sunday’s The Real Heroes 400 at Darlington, which marked NASCAR’s return to racing after a 10-week hiatus due to the coronavirus pandemic.

With that race in the books, DiBenedetto and the team are working to find more speed for Wednesday’s 500-kilometer race, a rare midweek prime-time TV appearance for the sport. Once again, there will be no fans in the grandstands due to the threat of spreading COVID-19.

DiBenedetto, who will be making his sixth career Cup start at the iconic South Carolina track, said he plans to review the broadcast of Sunday’s race, taped for him by his wife Taylor, to see what can be learned from it.

“I’ll watch the other guys and see what I can pick up as far as how to improve,” he said, adding that he expects crew chief Greg Erwin to make adjustments as well to the Mustang they’ll race on Wednesday. “We’ve got a little catching up to do, but we can do it.”

Wednesday’s race will be the 95th Cup appearance at Darlington for the Wood Brothers, who first competed there in the 1961 Rebel 300 with the legendary Curtis Turner, a close friend of the Woods, at the wheel of the No. 21.

Modern era fans point to the spring race at Darlington in 2003, where Ricky Craven edged Kurt Busch for the win in a door-slamming battle to the checkered flag, as the best-ever finish at Darlington. But for fans of an earlier era, the ’61 Rebel 300 was the gold standard for great Darlington finishes.

Here’s how author and historian Greg Fielden described the late-race battle between the veteran Turner and the youngster Fred Lorenzen in his book, Forty Years of Stock Car Racing: “Fair-haired Fred Lorenzen and old pro Curtis Turner literally fought each other with fists of steel in Darlington Raceway’s fifth-annual Rebel 300 in a death-defying slugfest which decided perhaps the most exciting stock car race of all time.”

Turner expressed his sentiments to reporters after the race, saying: “If I could have caught [Lorenzen] before he got the checkered flag, I guarantee you he never would have finished the race.”

It was the first of seven runner-up finishes at Darlington for the Woods, who have eight victories there. Six of those victories were with David Pearson driving. Cale Yarborough and Neil Bonnett scored the other two.

In Wednesday’s race, DiBenedetto and the Motorcraft/Quick Lane team will show that not all heroes drive race cars.

The team will honor Loretta Burton as a Star of Life.

Burton, a paramedic from Youngstown, Ohio, will be recognized for her actions that saved the life of a cardiac arrest patient in April of 2019.

On that day, she and her EMT partner were called to a dental clinic parking lot where they found an 81-year-old male in cardiac arrest. With the help of her partner, Burton began CPR and then continued ALS care on her own.

She was able to establish a return of spontaneous circulation, and the patient was transported to the emergency department of a local hospital. The patient was released a few days later with no neuro deficits or cardiac damage.

This save was a direct result of Burton’s dedication to the patients she serves. That dedication perhaps was demonstrated best when she was the medic on the scene of a car accident involving the man who had earlier tried to shoot her policeman husband. She treated this patient with respect, and he received the best of care.

Burton has been in EMS for 18 years. She began her career as an EMT and continued her education to become a paramedic. She attained the rank of supervisor but reduced her hours to part-time to care for her five children.

Wednesday’s 228-lap race is set to get the green flag just after 7:30 p.m. Eastern Time with TV coverage on FOX Sports One.

Motorcraft offers a complete line of replacement parts that are recommended by Ford Motor Company. From routine maintenance to underhood repairs, Motorcraft parts offer value with high quality and the right fit at competitive prices. Motorcraft parts are available nationwide at Ford and Lincoln Dealers, independent distributors and automotive parts retailers, and are backed by the Service Parts Limited Warranty of Ford Motor Company. For more information, visit http://www.motorcraft.com.

Omnicraft is part of the Ford lineup of parts brands: Ford Parts, Motorcraft and Omnicraft. Omnicraft is the exclusive non-Ford/Lincoln parts brand of premium aftermarket parts. With over a century of parts heritage to build upon, Omnicraft provides excellent quality and fit and is a preferred choice of professional automotive technicians. To find out more about Omnicraft, visithttp://www.omnicraftautoparts.com or contact your local Ford or Lincoln Dealership.
About Quick Lane Tire & Auto Center

Quick Lane Tire & Auto Center offers extraordinary service for routine vehicle maintenance including tire repair and replacement with a Low Tire Price Guarantee and a full menu of automotive services including oil and filter, brakes, alignments, batteries, and shocks and struts on all vehicle makes and models. Service is performed by certified technicians at more than 1,000 locations worldwide while you wait, and no appointment is necessary. For more information about Quick Lane, please visit http://www.quicklane.com.