2020 REARVIEW: With a third full year of NASCAR Cup Series competition under his belt, William Byron is ready to keep the momentum going when the 2021 season kicks off at Daytona International Speedway. Byron opened 2020 by adding to his already impressive résumé with a win in the Duel qualifying race at Daytona last February. He followed that with his first points-paying Cup Series win during the August race on the 2.5-mile oval. That first victory at NASCAR’s highest level came at the perfect time, locking Byron into the NASCAR Cup Series playoffs for the second consecutive season. When 2020 came to a close, the Charlotte, North Carolina, native was 14th in points with one win, four top-five finishes, 14 top-10s and 140 laps led.

THREE IS THE LUCKY NUMBER: Byron’s first trip to victory lane added his name to an impressive list of drivers who captured their first Cup Series win in their third season. Hall of Famers Bobby Labonte, Alan Kulwicki, and Rusty Wallace, along with Hendrick Motorsports teammates Chase Elliott and Kyle Larson, all earned their first win during their third full Cup Series season.

OLD SCHOOL, NEW TWIST: While the No. 24 Axalta Chevrolet has been synonymous with the iconic flames paint scheme, 2021 brings a new look for Byron’s Camaro ZL1 1LE. Keeping an old-school flair with a twist, Axalta Coating Systems unveiled its new colors for the No. 24 team in January. Utilizing a matte black base, Byron’s Chevy features bright stripes in an array of colors that will be impossible to miss on the track. Now in its 29th year of partnership with Hendrick Motorsports, Axalta returns as a primary partner on Byron’s No. 24 car for 14 races in 2021. For a better look at Byron’s new No. 24 Axalta Chevrolet Camaro ZL1 1LE, click here.

COMING FOR THE CLASH: With his first career points-paying NASCAR Cup Series win in 2020, Byron locked himself into the 2021 Clash at DAYTONA event that kicks off the new season. When the No. 24 Axalta Chevrolet unloads at Daytona, it will mark the 23-year-old driver’s second start in the exhibition race. In last year’s event, Byron ran up front, leading four laps before eventually being collected in an on-track incident that ended his night early.

TWENTY-FOUR TO THE TOP: In four of the last six DAYTONA 500 races, the No. 24 Chevrolet has started from the pole position: 2015 with Jeff Gordon and in 2016 and 2017 with Elliott. Byron most recently added to that statistic by becoming the second-youngest DAYTONA 500 pole winner in 2019, which also marked the Charlotte, North Carolina, native’s first pole award in the Cup Series.

DAYTONA DUELS: Byron will make his fourth start in the Daytona Duel qualifying races next Thursday, Feb. 11. In last year’s qualifying race, Byron lined up in the fourth position and patiently remained in the top half of the field within striking distance of the lead. As the laps wound down, the driver of the No. 24 made a move with two laps to go to take over the top spot, holding on to capture his first win in a Cup Series car and securing a fourth-place starting position in the DAYTONA 500.

BACK AT THE BEACH: The last time Byron was at Daytona International Speedway he ended the day in victory lane. When he and the iconic No. 24 team return, they hope to pick up where they left off – this time with a win in the DAYTONA 500. In fact, Byron has finished first or second in two of his last three races at the 2.5-mile superspeedway, and he’s led 80 laps over his six total Cup starts there – his most at any track. Byron’s success at Daytona doesn’t end there. During his 2017 NASCAR Xfinity Series championship campaign, he qualified third in the July race and led 29 laps to score the victory, becoming the youngest driver with an Xfinity Series win at Daytona at 19 years, 7 months and 1 day.

RUDY, RUDY, RUDY: The No. 24 team has a new crew chief calling the shots for the 2021 season: Ryan “Rudy” Fugle. While 2021 will be Fugle’s first year at the Cup Series level, his voice will be a familiar one to Byron over the radio. The driver-crew chief combo previously worked together in the NASCAR Camping World Truck Series during Byron’s rookie year in 2016. They notched a record-breaking season with seven victories and led 21% of all laps run. The duo also scored three pole awards before narrowly missing the driver title, but they still collected the owner championship and driver rookie of the year honors. Before joining Hendrick Motorsports, Fugle spent eight seasons at Kyle Busch Motorsports, amassing 28 total truck wins as a crew chief, which tie him for second all-time in the series. The Livonia, New York, native accumulated 24 poles, 78 top-five finishes and 119 top-10s across his 168 races on top of the pit box for the organization. In those events, Fugle worked with 15 different drivers and visited victory lane with six of them – the third-most by a truck crew chief. Of those six, Byron’s seven wins are the second-most Fugle scored with one driver, behind his 10 with Kyle Busch. 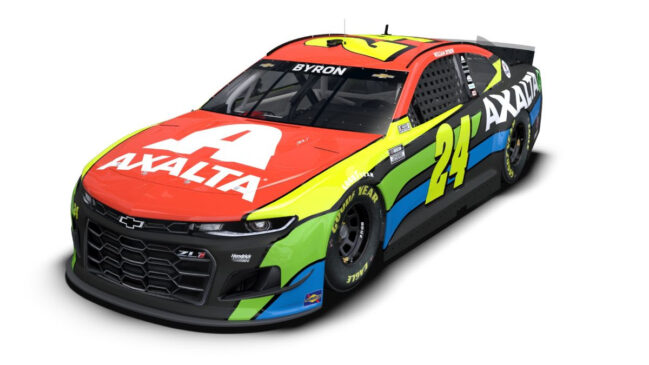 AXALTA ELECTROLIGHT: On Thursday, Axalta unveiled the newest addition to the Axalta Injector at Daytona International Speedway – a newly painted No. 24 Hendrick Motorsports car that will be on display for fans to see all year long. The car on display combines Axalta’s new solventbourne basecoat, Cromax XP, with its 2021 Color of the Year, Electrolight. The refreshing green-yellow hue has been formulated with mobility-technology while utilizing the easy-to-use solventborne basecoat that delivers a high-quality finish.

BEACH BUMS: Kicking off the 2021 NASCAR season in the Sunshine State, three crew members on the No. 24 team will make their way back home. Longtime Hendrick Motorsports rear-tire changer Johnny Roberts hails from Titusville, Florida, just down the coast from Daytona Beach, where he spent much of his time surfing before making his way to North Carolina and trying out with Hendrick Motorsports in 2010. Engineer Brandon McSwain grew up approximately 100 miles from the “World Center of Racing” in Auburndale, Florida. Just a few miles down the road from where McSwain grew up, engine tuner Ben Proctor calls Lakeland, Florida, home.