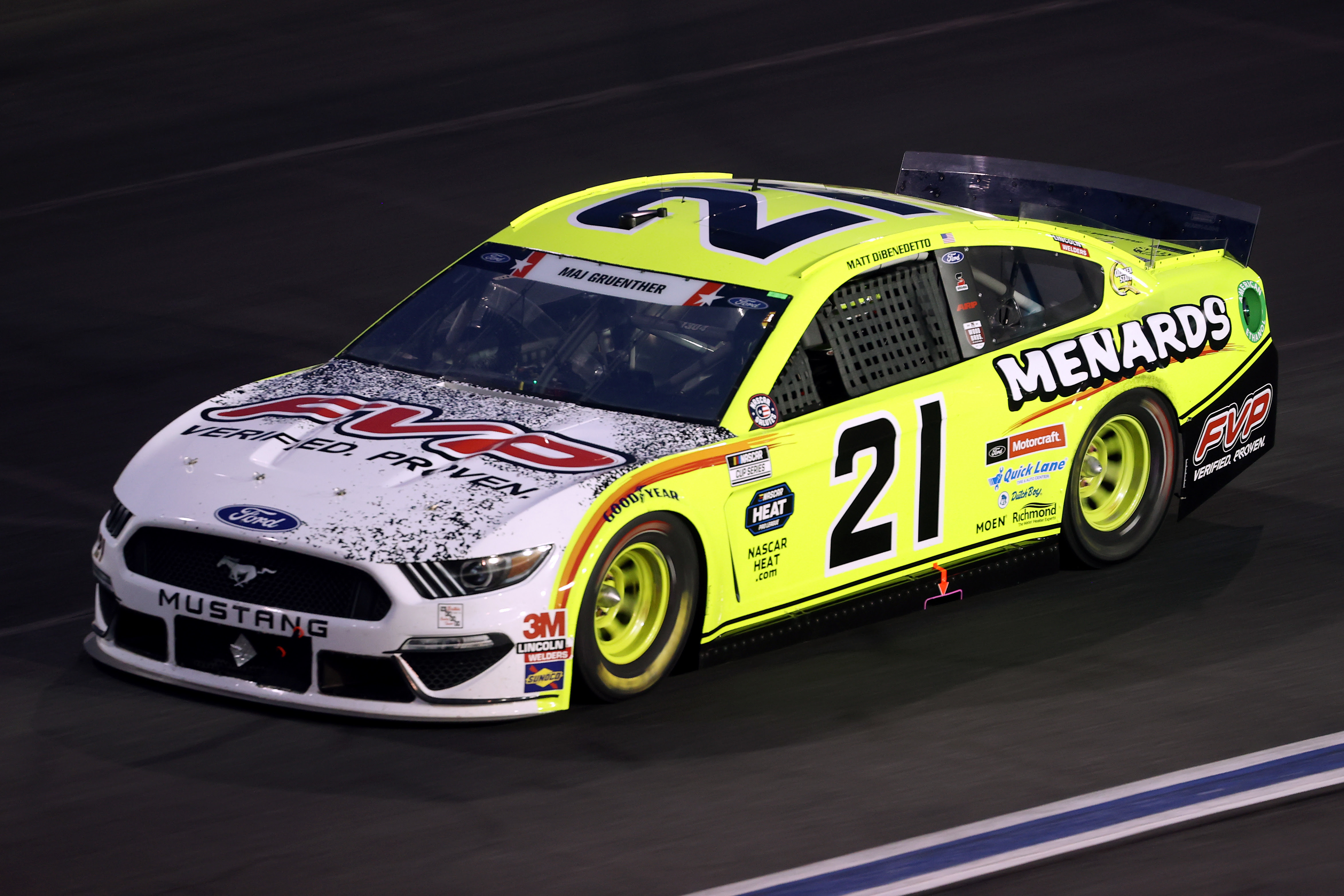 Matt DiBenedetto and the No. 21 Menards/FVP team had an up-and-down day in Sunday’s Coca-Cola 600 at Charlotte Motor Speedway before ending up 17th at the finish.

The day started on the down side as the Menards Mustang was super loose in the first qualifying session held since the Cup Series resumed racing following a 10-week halt due to the coronavirus. DiBenedetto lost control and bounced off the wall, forcing the team to pull out a back-up Mustang.

That meant he had to start the 600-mile marathon from the rear of the pack.

The drop of the green flag was the start of an upswing for DiBenedetto and the Menards/FVP team. He made up 16 positions before the caution flag flew at Lap 20.

By Lap 30 he was up to 15th place and was running there on Lap 49 when the race was halted for 68 minutes due to rain.

Back on the track, DiBenedetto continued to struggle with a loose handling condition and dropped to 20th place, so when the caution flag flew just after Lap 100 for the end of Stage One, he headed to pit road for a series of adjustments to the No. 21 Mustang.

He returned to the track and passed several cars, but at the end of Stage Two was running 23rd, one lap down.

Throughout most of the third 100-lap Stage, DiBenedetto ran in the free-pass position and finally was able to rejoin the lead lap when the caution flag flew at Lap 277 for a spin by Matt Kenseth.

Back on the move forward, he finished the third 100-lap Stage in 15th place.

A call to take just two tires on the pit stop at the end of the Stage propelled DiBenedetto into the lead, and he led Laps 304-306 under the caution flag and restarted as the leader.

He led three more laps once the green flag flew again before the drivers who took four tires overtook him.

DiBenedetto ran mostly in the top 10 over the final 100 laps. He was in 11th place when the caution flag flew with two of the scheduled 400 laps remaining for a blown tire by William Byron.

That sent the race into overtime.

DiBenedetto stayed on the track while other pitted for fresh tires, so he restarted seventh for the green-white-checkered-flag run to the finish.

But the final two laps didn’t work out in his favor, and he wound up 18th at the finish. He picked up one spot when the car of apparent runner-up Jimmie Johnson was disqualified for failing a post-race inspection.

Eddie Wood said he was proud of his team’s efforts throughout the day on Sunday.

“They never gave up,” he said. “We went from having to go to a back-up car to losing a lap to leading the race.

“We were able to honor Major Lucas Gruenther as part of the 600 Miles of Remembrance, and the sport as a whole did a nice job of honoring all the servicemembers who gave the ultimate sacrifice for their country.

“And we congratulate Brad Keselowski, Jeremy Bullins and Team Penske on their well-deserved victory.”

DiBenedetto and the No. 21 team, now 11th in the Cup standings, return to Charlotte Motor Speedway on Wednesday night for a 500-kilometer (312-mile) race that will be broadcast on FOX Sports One.
###

A family owned company started in 1958, Menards is headquartered in Eau Claire, WI.  Menards has more than 300 retail stores located throughout the Midwest in the states of IL, IN, IA, KS, KY, MI, MN, MO, NE, ND, OH, SD, WI and WY.  Menards is known throughout the home improvement industry as the low price leader.  It’s famous slogan “Save Big Money at Menards” is widely known and easy to remember.  For more information, visit Menards.com, like us on Facebook or follow us on Twitter, Instagram or Pinterest.