KANNAPOLIS, N.C. (May 27, 2020) – Working in extreme conditions where the clock is always ticking, Stewart-Haas Racing is well-versed in delivering under the most intense circumstances. The championship-winning NASCAR team has put its experience to good use during the COVID-19 pandemic, partnering with Novant Health to deliver 20 million face masks and produce 120 ICU webcam carts.

Novant Health has launched an emergency drone logistics operation for hospital pandemic response through a partnership with Zipline, the world’s only national-scale, on-demand drone logistics service, which will provide drone flight services. Stewart-Haas Racing is providing 25,000-square-feet of property adjacent to its Kannapolis campus for Zipline to deliver medical supplies via its fleet of drones to Novant Health’s integrated system of physician practices, hospitals and outpatient centers.

The operation provides contactless distribution of personal protective equipment and critical medical supplies to frontline healthcare workers in the Charlotte, North Carolina, metro area. The operation helps position Novant Health, which operates 15 hospitals and nearly 700 locations in the southeastern United States, to adapt quickly to the evolving pandemic and could lead to such innovative uses as testing, drug trials and vaccine distribution in the future.

The groundbreaking operation will provide ongoing drone logistics flights in Class-D controlled airspace, where all air traffic is actively managed by the FAA under a Part 107 waiver issued to a major U.S. healthcare system. True to its roots, North Carolina is once again “First in Flight.”

“This new part of our relationship with Stewart-Haas Racing has – quite literally – taken our logistics operations to new heights,” said Mark Welch, senior vice president of supply chain, Novant Health. “Once again, SHR stepped up when we had a need in response to this pandemic by providing us the critical space to create our distribution center. This operation is taking Novant Health logistics to the next level and we could not do it without the assistance of Stewart-Haas Racing.”

The operation uses battery-powered drones with autonomous navigation systems which launch from a distribution center near Stewart-Haas Racing. Novant Health is able to move its products efficiently from this hub to its frontline medical teams powered by Zipline’s long-range, fixed-wing drones. Since 2016, Zipline has used its fleet of drones to deliver 110,000 vaccines, units of blood and critical medications internationally.

“As soon as we heard about the initiative Novant Health had with Zipline, our only question was, ‘How can we help?’,” said Mike Verlander, vice president of sales and marketing, Stewart-Haas Racing. “Finding a tract of land that could be used for the distribution center was paramount, and Gene Haas, the co-owner of our race team, had the perfect spot right behind our race shop. He cut through all the red tape and dirt was quickly moved. We helped with logistical coordination during the build and have seen firsthand the work of the Zipline crew and the efficiency of the distribution center and the technology it houses. It’s all very impressive.”

In the span of a few minutes, a lightweight drone takes off from Novant Health’s distribution center, with the package placed inside a parachute in the belly of the Zipline drone. When the drone reaches its destination, it simply drops the parachute and the healthcare worker collects it. The drone then returns to the distribution center to get outfitted for its next flight.

“Zipline has been hard at work helping other countries respond to the pandemic,” said Keller Rinaudo, CEO, Zipline. “And we’re proud to partner with Novant Health, a true leader in healthcare innovation, to begin helping in the United States as well. We’re likely in for a long-term fight against COVID-19. Using contactless drone logistics will be an important tool in that effort. The work underway here in North Carolina will provide the rest of the country with a blueprint for how to build the most resilient and responsive healthcare system possible.”

Over the next two years, the partnership plans to expand beyond emergency operations in the Charlotte area to regular commercial operations, subject to approval under FAA Part 135 rules, to serve health facilities and, ultimately, patients’ homes across the state. Novant Health and Zipline’s partnership seeks to create a next-generation model for health system logistics leveraging contactless drone deliveries. To accomplish this, Zipline works hand-in-hand with national civil aviation authorities.

Safety is Zipline’s top priority at every stage of operation. Zipline drones are designed to automatically detect issues inflight and safely return to base for repair. Each drone is equipped with redundant flight computers, motors, communications systems, and flight control surfaces, as well as redundant navigation and power systems. In the event of emergencies like severe weather or unplanned flight operation issues, each drone is equipped with a parachute that allows it to make an immediate landing by slowly descending to the ground.

Zipline drones weigh approximately 40 pounds with payload, have a top speed of 80 mph, can service a 50-mile radius, and can carry packages close to four pounds, even in high winds and rain. 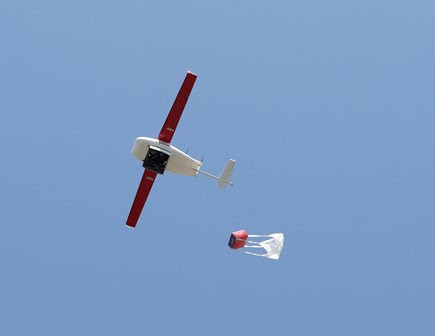