Inside Line Promotions – WINDOM, Minn. (Jan. 26, 2022) – A fresh design and heightened goals highlight the end to the offseason for Big Game Motorsports and David Gravel (from Watertown, CT), who return to the World of Outlaws NOS Energy Drink Sprint Car Series trail in two weeks following a successful first season together.

The team placed second in the 2021 World of Outlaws championship standings – a career best for Gravel and tied for the best ever for the team. The next step is a championship, which is the ultimate goal. 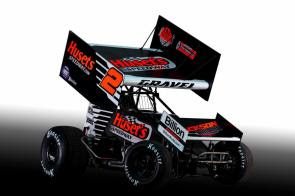 “It was a great first year,” Gravel said. “We’re keeping most of the team from last year so I’m really looking forward to continuing to build my relationship with Cody (Jacobs) and the guys. We have most of the same equipment. I feel we should start off pretty close and then fine-tune.”

Gravel captured 11 World of Outlaws victories last year, which is the most in a single season for Big Game Motorsports since 2012. The team added three non-sanctioned wins for a total of 14 trips into Victory Lane.

“We had a great season and still have room to grow so I’m excited for our potential,” Gravel said. “Hopefully we can start off the year on a strong note at Volusia. It’s a track where I’ve been successful, but don’t have a lot of wins.”

The season is slated to begin with the 51st annual DIRTcar Nationals at Volusia Speedway Park in Barberville, Fla., which runs Feb. 8-12 with the first two nights being sanctioned by the FloRacing All Star Circuit of Champions followed by the first three World of Outlaws races of the season.

Feb. 8-12 at Volusia Speedway Park in Barberville, Fla., for the 51 st annual DIRTcar Nationals with the FloRacing All Star Circuit of Champions and World of Outlaws NOS Energy Drink Sprint Car Series