The victory was the second straight for David Gilliland Racing, after Todd Gilliland won last Saturday’s NASCAR Camping World Truck Series race on dirt at Knoxville Raceway in the No. 17 Ford, the same number Preece drove on Friday.

The win was an encore performance for Preece, who scored his first Truck Series victory in last year’s Nashville race. A part-time utility player in the Ford camp this season, Preece triumphed for the second time in his eighth career start.

In addition to the traditional guitar trophy, Preece also earned a $50,000 bonus for winning the second event in the NCWTS Triple Truck Challenge.

“We got a second guitar—I may have to start a band!” Preece exulted after climbing from his truck. “These guys (in the shop) work their tails off, and I know what it takes to win races. They give me phenomenal race cars. I’m just proud to be the one holding the steering wheel.”

Preece took control of the race in the second stage, passing Smith for the lead on Lap 74. After winning the stage, which ended on Lap 95, Preece forged a comfortable lead before the trucks of Grant Enfinger, Corey Heim, Matt DiBenedetto and Ty Majeski hurtled into Turn 3 four-wide.

“It was the end of the race, and everybody went crazy, just like always in these truck races,” Enfinger said. 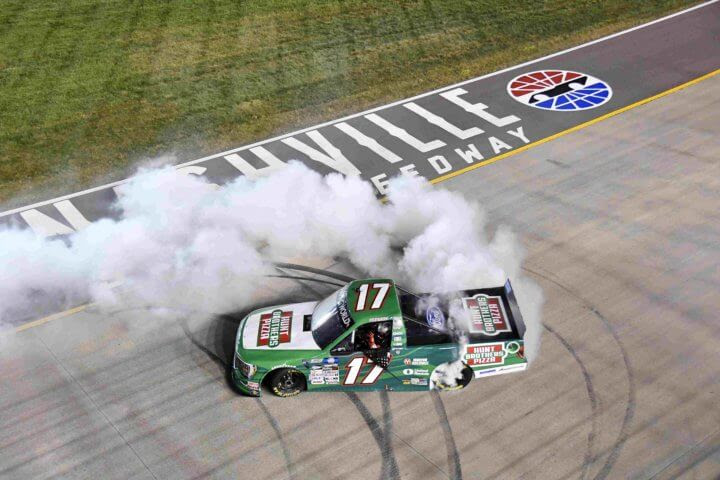 Preece got the jump on the subsequent restart on Lap 135 of 150, but the green-flag action was short-lived. Moments after the restart, contact from Max Gutierrez’s Chevrolet sent Hailie Deegan’s Ford sliding into the outside wall.

On the restart with 10 laps left, Preece once again forged ahead, but both Smith and Hocevar closed dramatically with three laps left, forcing Preece to play defense.

“It was a little closer than I wanted it to be,” Preece said. “Just old tires, the heat cycles. They were chattering. I had clean air, and I put as much dirty air on him (Smith) as possible. I wasn’t going to give it up.”

Smith took the series lead by 21 points over Nemechek.