ST. AUGUSTINE, Fla. (Aug. 12, 2022) – In his 28th race since joining the Trans Am Series presented by Pirelli in 2020, Scott Borchetta earned his first podium finish. His third-place run couldn’t have come at a better time or place – last Saturday’s TA2-class race that was part of the second annual Big Machine Music City Grand Prix weekend on the streets of downtown Nashville, Tennessee, headlined by the NTT IndyCar Series main event on Sunday.

Borchetta, a Southern California native who has called the Nashville area home since he was a teenager, outdueled all but two drivers in the 40-car field in his M1 Racecars-built No. 48 Big Machine Vodka SPIKED Coolers entry. Earlier in the day, he posted his best qualifying effort to roll off third for the 75-minute race on the 2.17-mile, 11-turn street course.

The TA2 race, presented by Big Machine Vodka SPIKED Coolers and Race for RP (Relapsing Polychondritis), will air on the CBS Sports Network at 7:30 p.m. EDT on Saturday, Aug. 13 with an encore broadcast at 1 a.m. on Sunday, Aug. 14.

Borchetta, founder of the Big Machine Label Group and owner of Big Machine Distilleries, has been a key component in making the Music City Grand Prix a reality. His racing career began in earnest at Nashville Fairgrounds Speedway in the 1990s and he gradually rose to the ranks of the NASCAR SuperTruck Weekly Series, where he won three consecutive championships from 2003 to 2005. After the 2005 season, Borchetta didn’t expect to race again as his every waking moment was being put toward building Big Machine Records. 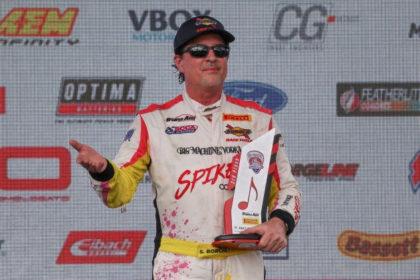 Enter NASCAR Hall of Famer Ray Evernham. In 2018, Evernham convinced Borchetta to go racing in the Sportscar Vintage Racing Association (SVRA) and it reignited Borchetta’s love for racing. Now, Borchetta is the reigning SVRA national champion and Group 6 title winner. He has won the season-ending Group 6 championship race at Circuit of the Americas (COTA) in Austin four years running, which led to Borchetta competing in TA2.

“It’s taken a minute, but we finally made it to the TA2 podium,” said Borchetta, whose third-place finish in Nashville eclipsed his previous best effort of fourth, earned in July 2021 at Road America in Elkhart Lake, Wisconsin. “This is such a great event and I couldn’t be happier about getting my first podium here and now.

“We’ve got three races left this season and all of our team’s combined focus will be going toward trying to get that first win. We’ve shown consistency this season and I have to credit my amazing Scott Borchetta Racing Team and, of course, the Lagasses (Scott and Scott Jr.) at TeamSLR with their great M1 Racecars. Everybody has been working so hard and the results are really starting to show.

“It’s really an accomplishment to reach the podium in this series, which is loaded with some of the best sports-car drivers and teams in racing. You have teenagers winning races who will go on to be the future stars of our sport racing alongside seasoned champions. I have to say it’s an honor for me, the elder statesman, to be up here racing competitively with these young racers.”

TeamSLR is the exclusive representative of M1 Racecars, an official TA2 constructor. It builds rolling chassis and complete Chevrolet Camaros, Ford Mustangs and Dodge Challengers for Trans Am competition.