WINCHESTER, N.H. – Ben Byrne drove himself back into the championship hunt Saturday at Monadnock Speedway, blasting to victory in the 40-lap NHSTRA Modified main event a week after crashing out of the lead at the high-banked quarter-mile.

Jake Dumas pulled some magic from his hat to win the Pro 4 Modified Paul Roach Memorial 35-lapper; both Hillary Renaud and Aaliyah Tacy scored their second wins of the summer, and LMS star Cole Littlewood earned his eighth 2022 victory lap Saturday at Monadnock.

And, while Kyle Boniface took no prisoners in storming to his fourth Pure Stock victory of the season, the real story here was the dead heat atop the points parade with only two events remaining.

Byrne, who suffered a hand injury a week ago, led all the way in Saturday’s main event. After Brian Chapin’s ride broke loose at the start, this one went green all the way, with the 41-year-old Byrne in complete control en route to his fifth win of the summer.

Top points man Tyler Leary – a four-time winner this season – held the deuce spot until beginning to filter backward on lap 31. Matt Kimball then took over second, with Aaron Fellows blasting into third four laps later. Leary would also yield the four-spot to Trevor Bleau before ending the night fifth but still atop the points parade, 584-580 over Byrne.

If you got up to get a hotdog late in Saturday’s Pro 4 Paul Roach Memorial, you missed a great ending.

Rob Richardi, who has won nine times over the years at Monadnock, had dominated Saturday’s 35-lapper, with Doug Meservey in his shadow, the first 33 go-rounds. But then Craig Phillips’ ride detonated in turn one, bringing the event to a halt for extensive clean-up.

Jake Dumas, third most of the way but never in strong contention, then took full advantage of opportunity and stole the show. With Dumas winning his first Paul Roach Memorial event, Meservey held on for second, Ryan McPartland moved up to third, and Richardi came home fourth.

While 35 years separate defending Pure Stock king Chris Davis and three-time winning teen JD Stockwell, they finished just inches apart Saturday night on the high banks, and when their work was done, they were dead even atop the points parade.

Davis came into Saturday’s event two points ahead. And when Stockwell took the lead from Billy Graham on lap nine, he briefly moved to the top until Kyle Boniface made the pass and charged off to victory lane, with Stockwell and Davis finishing glued together in second and third, they were tied at 538.

Cole Littlewood passed Ryan Bell for the lead on lap five and then drove away to his eighth win of the summer in the Late Model Sportsman 25-lapper. As often, brother Justin Littlewood – a three-time winner himself – was second, with Bell staying strong for third. Ryan Currier’s absence took him out of championship contention with only two events remaining.

Hillary Renaud made it two in a row and two on the season, wiring the 25-lap Street Stock feature Saturday. Kenny Thompson had second in hand until spinning on lap 23, moving top points man Tim Wenzel into the runner-up slot, and Keith Johnson to third.

Greg Gilbert of Milton, VT, aboard a 1937 Chevy Coupe, topped the Senior Tour Antique Racers Sportsman feature. He was followed under the checkers by Rick MacDowell’s 1970 Camaro racer and the 1976 Pinto-bodied ride of Charlie Lima, of New Bedford, Mass.

In the STAR Modified 15-lapper, it was Alan Zemla of Windham, Maine winning with his 1937 Chevy Coupe. Gary Moore of Manchester, N.H. was second, and Tom Trempe of nearby Jaffrey, N.H. third in a 1967 Mustang.

With only two events remaining in its very successful 2022 racing season, Monadnock Speedway will return to action next Saturday, September 10, with its annual Open Track Party held from 5 to 6 p.m., followed by a six-division card of racing including a 50-lap NHSTRA Late Model Sportsman Race For The Ring event. 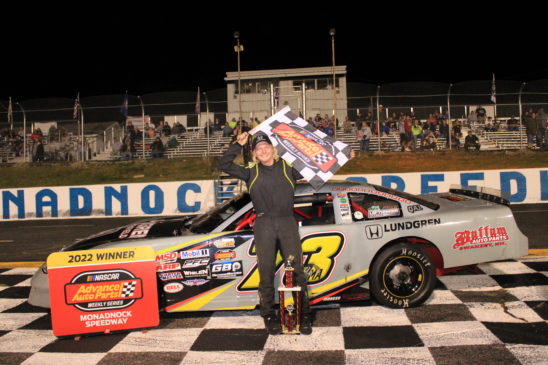