(Stafford Springs, CT)— Stafford Speedway officials have put the finishing touches on their 2023 racing schedule. 23 events dot the calendar from late April to late September with a focus on weekly racing highlighted by special events throughout the season. The 2023 season marks the 53rd consecutive season the Stafford Springs, CT half-mile has been operated by the Arute family and will kick off with the biggest Modified event in the country, the 51st running of the NAPA Auto Parts Spring Sizzler®, April 29th & 30th. 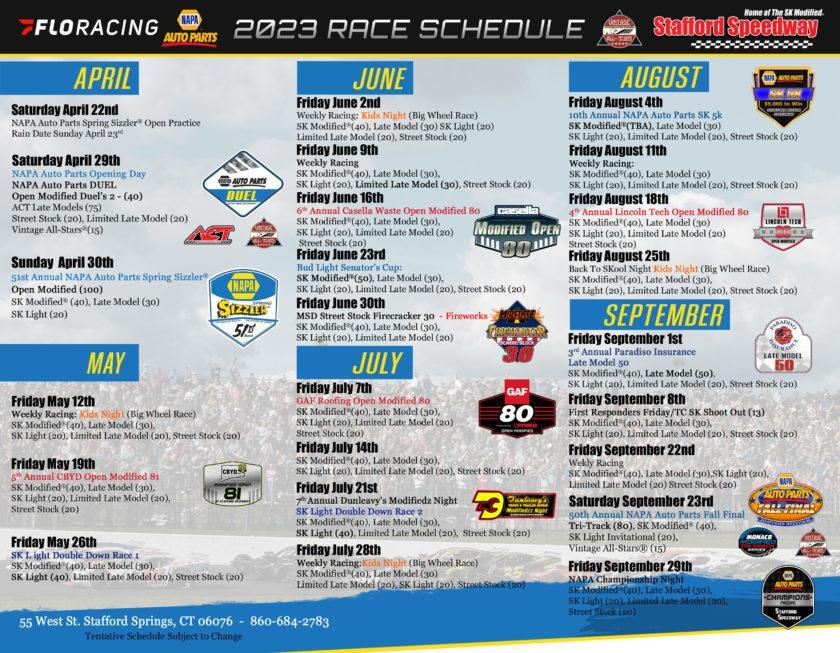 The 2023 NAPA Spring Sizzler® Weekend will once again be one of the biggest short track events of the year and will feature two separate days of racing. The NAPA Auto Parts Duel, two 40-lap qualifying races, will be held Saturday, April 29th and will set the field for Sunday’s 51st Spring Sizzler®. Also on the card for Saturday will be the Street Stocks, Limited Late Model, Vintage All-Stars, and for the first since 1985, the American Canadian Tour (ACT) Late Models.

Sunday, April 30th will play host to the highest paying Modified race in the country, the $20,000 to win 51st running of the NAPA Auto Parts Spring Sizzler®. The SK Modified®, SK Light Modified, and Late Model divisions will accompany the Modifieds for a packed afternoon of racing.

“Drivers and fans responded well to the Spring Sizzler® format in 2022,” explained Stafford CEO Mark Arute. “We went back to the roots of the Sizzler® with a shorter 100-lap race but also added a twist with the duel qualifiers on Saturday. The 2023 edition will be similar but new in  2023 the winner will go home with a guaranteed $20,000 before bonuses.”

“The core of the 2023 Stafford Speedway schedule remains weekly racing,” continued Arute. “Our weekly competitors put on a great show week in and week out. We are proud that they call Stafford Speedway home and look forward to continuing to tell each of their stories and further connect the race fans to the drivers that compete on the half-mile.”

Stafford’s 5 weekly divisions, including SK Modified®, Late Model, SK Light Modified, Limited Late Model, and Street Stocks, are scheduled to compete every Friday night beginning with Opening Night on May 12th and running throughout 2023 culminating with the NAPA Auto Parts Champions Night on Friday, September 29th, where the season champions will be crowned.

Each of Stafford’s 5 weekly divisions will have at least one special event night beginning with the first of two 40-lap SK Light Modified Double Down races on Friday, May 26th. The second SK Light double down race will be held July 21st with Dunleavy’s Modifiedz Night. Bonuses for the highest average finishes across both 40-lap events will be awarded. Limited Late Models will go an extra 10 laps on June 9th, Street Stocks will run an extra 10 laps on June 30th for the annual Midstate Site Development Firecracker 30, and Paradiso Insurance returns as the presenting sponsor for the Late Model 50 on September 1st.

Stafford’s top weekly division, the SK Modifieds®, will have 3 special events in 2023 including:

Four Friday Night Open Modified events return to the Stafford speedway schedule in 2023, one per month throughout the season:

May 19th – Call Before You Dig Open Modified 81

“Our Open Modified program has taken on a life of its own over the last few seasons,” explained Arute. “We’ll look to continue that success and further develop those events to become can’t miss races for drivers and fans. The 80-lap sprint style has proven to be the perfect format for great racing.”

Woody Pitkat will look to continue his 2022 success in the Open Modified events, after winning 3 of 4 races but will have an ever growing cast of drivers looking for their own triumphs in the 80-lap sprint races.

Season tickets for the 2023 season are now available online at StaffordSpeedway.com/tickets. Early discount pricing is available through December 15th. Contact the track office with any questions.