PENSACOLA, Florida (December 5, 2020) — The Snowflake 100 was an epic event. Well, the Snowflake 99 was epic. The final lap is where the lore of the event will take its hold in the history books, as we saw a dump and run for the win, followed by that win being called off while the driver was still in victory lane, resulting in an upset victor and even more upset folks.

For the second year in a row, Stephen Nasse crossed the finish line first in a marquee event during the Snowball Derby weekend, after using the dump and run on the final lap, the final corner, to get by leader Bubba Pollard in the 22nd Snowflake 100.

While in victory lane, as Nasse was being interviewed by Speed51.TV, race officials were reviewing the finish. By the end of the interview, Nasse was out — relegated to the end of the lead lap for aggressive driving on the final lap.

This left Jake Johnson of Rehoboth MA, a New England native that had to win the last chance qualifier to even make the main event, the winner in a stunned victory lane.

Johnson started in 31st, then methodically and quietly worked through the field as the top contenders battled up front. When the chaos ensued ahead of him, Johnson was there, ready to capitalize.

“I don’t really know what to say,” said Johnson in victory lane.  “I blew qualifying out the window but luckily I’ve got a bad fast race car.  Thanks to Chase Pistone, we were able to take this thing to victory lane.”

“I was just focusing on hitting my marks and just making sure if we got a late caution I would be able to pounce.  I didn’t really see, I just saw cars and smoke.  I was keeping it wide open, that’s all I know.”

Following victory lane ceremonies, Stephen Nasse took his car to the tech shed, and waited as the now declared victor, Johnson, had his car torn down in post race technical inspection.

The wait continued for well over an hour as the final feature of the night, the Outlaw Stocks, raced on.

After Jay Jay Day took the checkers, track promoter Tim Bryant and race director Nicholas Rogers made their way to the tech, where they had a closed-door meeting with Nasse.

Nasse, silently, made his way from the tech shed to an awaiting golf cart which then took him away.

No comment from the Jett Motorsports driver, or team at the time of this posting.

“Due to the contact off of the bumper of the Nasse machine to the Pollard machine, it was deemed that it was rough driving involved that created Pollard to spin out,” said Rogers. “I went through multiple video replays, slowed the video down to watch for wheel movement and the attitude of Bubba’s racecar to see if ever regained any kind of control. In my opinion watching the video he did not, so it was a continuous act that caused Bubba to spin off the nose of Nasse. For that reason, he was penalized to the rear of the lead lap, declaring the 15 car the winner.”

And now… The Race Rundown… 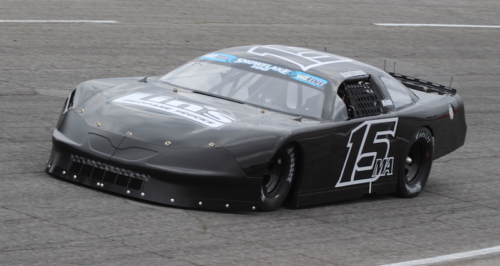 Derek Thorn started from the pole and led the way through the first half of the race.

Further back, Ryan Luza, who many thought would be a factor in this race, began to drift backward, settling into a back of the top ten spot that he would maintain throughout the race.

Back up front, the trio of Thorn, Stephen Nasse and Bubba Pollard took command of the field, setting up a thrilling race among themselves.

The first yellow of the race occured on lap 20 for Steven Chunn stopped in turn two.

Over the course of the next 77 laps, the leading trio would battle side by side, neck and neck, even going threewide on occasion, putting on an epic show in front of a thrilled crowd.

Through five more cautions they battled. With 20 to go, Derek Thorn’s tires had about enough and drifted back. Nasse and Pollard continued to fight.

With three laps remaining, Pollard having creeped ahead by a car length or two, was faced with a smoking car ahead that caused just enough hesitation to allow Nasse to get to the back of Pollard.

On the final lap, a stalking Nasse went full send into turn four.

Nasse, shoving his nose in deep and under the rear of Pollard, moved the Georgia driver up and out of groove, then cruised by to reach the checkered flag first.

Nasse pulled into victory lane as Pollard took his car to the hauler, and while safety crews tended to the mess of a crashed Steven Chunn and Hudson Halder (with Halder ending up on top of Chunn, mind you…), Nasse was interviewed by Speed51.TV.

After the dust settled, Pollard had this to say to those that questioned if Nasse needed to be worried in Sunday’s Snowball Derby.

Santino Ferrucci of Woodbury, CT could possibly add another racing discipline to his resume in 2021.

Coming off his first season as a team leader in the NTT IndyCar Series where he placed 13th in the championship for Dale Coyne Racing, Ferrucci confirmed to RACER on Friday that he is investigating options to compete in NASCAR next year. While the 22-year-old said he has not had conversations yet, he does have “a couple of people” looking into a few different things.

Ferrucci is looking at both the NASCAR Xfinity Series and Cup Series, specifically at the Bristol dirt event and Charlotte Roval, but said that any stock car program would be in addition his still being in IndyCar next season.