CLAREMONT, N.H. – Ricky Bly stormed to his tenth win of the summer Friday at Claremont Motorsports Park, with Dave Greenslit staying close behind as he earned his ninth 2022 victory lap.

Super rookie Nick Houle won his fifth of the year in the Mini Stocks, Colton Martin was unofficially the Pure Stock victor, and Robert Shaw won for the third time in the Six Shooters.

Steve Bly and Cam Curtis led the Route 103 Auto/Heads Up Motorsports Late Model Sportsmen to the green, with Bly pouncing on the opening lead and Jeff Murray following him to the point. Ricky Bly was up to third on lap three and quickly taking aim at the top spot.

He had second on lap six and rocketed into the lead the next time around. Ben Poland got up for second on lap nine but had nothing for Bly. Curtis, strong all night, came home third, with Cody Schoolcraft edging Craig Smith for fourth.

Dennis Greenwood and Trevor Rocke shared row one as the R.E. Hinkley Fuel Co. Street Stocks came to the green. Greenwood led laps one and two, with Rocke then taking charge,

Dave Greenslit, firing from row four, got up for second on lap 12, then taking the lead on lap 15 and never looking back. Chris Lindquist was in the mix all night, earning the runner-up hardware, with Matt Sonnhalter making a last lap pass to claim third. Greenslit and Briana Akusis won the heat races.

Nick Houle, from row two, led all the way in the In City Sugar Shack Mini Stock feature, powering to victory for the second week in a row. Friday, he swept both his heat race and the 25-lap feature.

A lap-15 caution brought Greg Millette to Houle’s side but he could advance no further, taking the checkers second in the nose-to-tail finish. Josh Dunn came on strong in the closing laps to finish third.

Bruce Jaycox led the first six laps of the LaValley Building Supply Pure Stock feature before being unceremoniously punted in turn three to bring out the event’s third and final caution. Rookie powerhouse Colton Martin then took over, bringing points leader Chris Chambers and former winner Aiden White with him.

White would snatch second from Chambers on the final lap, but his third-place finish, coupled with JD Stockwell’s disappointing 15th-place showing and Nolan McClay’s absence, gave Chambers a big boost in the championship points parade.

Robert Shaw took charge on lap two of the Avery Insurance Six Shooter feature and never looked back. Steve Miller Jr. chased him all the way but had to settle for second, with points leader Steve Miller Sr. third on the night. 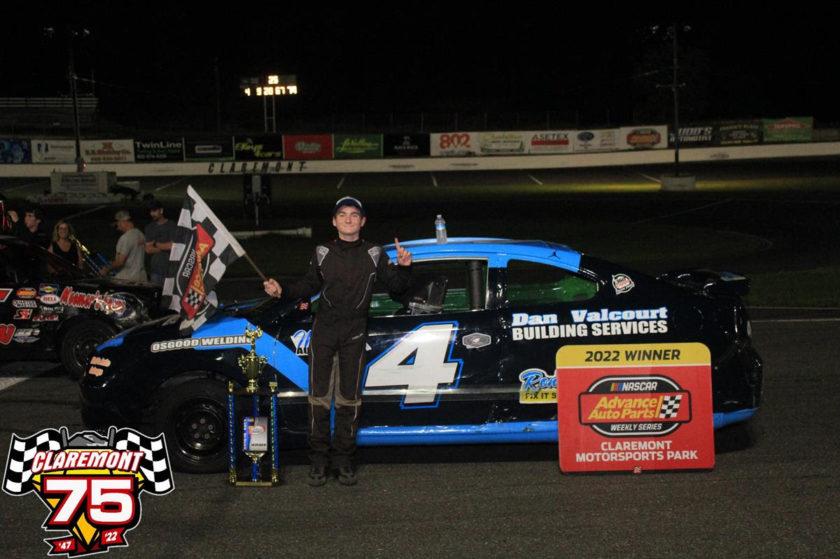 (no photo credit received, please contact us to be credited)